Whether your child is a spy-in-training -- trying to keep his or her journal from falling into the wrong hands, or wanting to keep a surprise a surprise -- cryptography is a useful skill to have. Cryptography is the name for encoding and decoding information – that is, changing it somehow, to prevent others from reading it, and figuring out how to change it back into a message you can understand.

"Ciphers" are ways of encoding and decoding information that use a series of very precise instructions. Encourage your child to become a cipher with these steps and materials.

When your child is gathering his tools and materials, ask him to think about how secretive he wants his message to be. For example, writing with a big black marker is not as secretive as invisible ink. Will he write his message on normal paper or across pieces of a puzzle? Is his message going to be put in a normal envelope and mailed or does it need to fit inside a tiny secret compartment?


Tools:
Something to write with

Materials:
Something to write on

Encoding With the Caesar Cipher
Also known as the shift cipher, the Caesar Cipher is one of the simplest and most widely known encryption techniques. Every letter in your child's message is replaced with the letter that comes a certain number of places later in the alphabet. Have your child follow these easy steps to use the Caesar Cipher.

Step 1. Write out the entire alphabet in a line.

Step 2. Choose a number to be your "rotation" amount. In this example, it is 7. Count this many letters into the alphabet.

Step 3. Under your first line, starting at the letter you "rotated" to, rewrite the alphabet. When you get to "Z," go to the beginning of the alphabet line above this one and continue filling in letters until you've rewritten the entire alphabet.

Hint: Drawing vertical lines between each letter pair can help you see which letters are paired together. Using different colors for the regular and "rotated" alphabet can help you remember which is which.

Step 4. Decide what your message is going to say and write it on a piece of paper. Now you're ready to encode it! Look at the first letter in your message, and find it in the top row of your code sheet. Then look for the letter on the line in the bottom row of your code and write it on a new piece of paper. In this example the first letter is "I," and the one below it is "B." Continue encoding the rest of the letters in the message.

Step 5. To decode a message, you do the process in reverse. Look at the first letter in the coded message. Find it in the bottom row of your code sheet, then find the letter it corresponds to in the top row of your code sheet and write it above the encoded letter. This can be confusing at first! It takes practice to be a fast decoder. 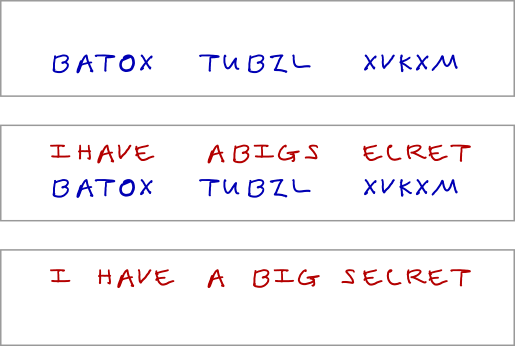 Taking It Further: Jigsaw Puzzle Pieces
When your child solves a cipher, he is solving a kind of puzzle. Why not make your child's cipher even more secretive by writing it on the pieces of a real jigsaw puzzle? Whoever solves it has to assemble the puzzle to see the entire encrypted message and then dig into solving it. 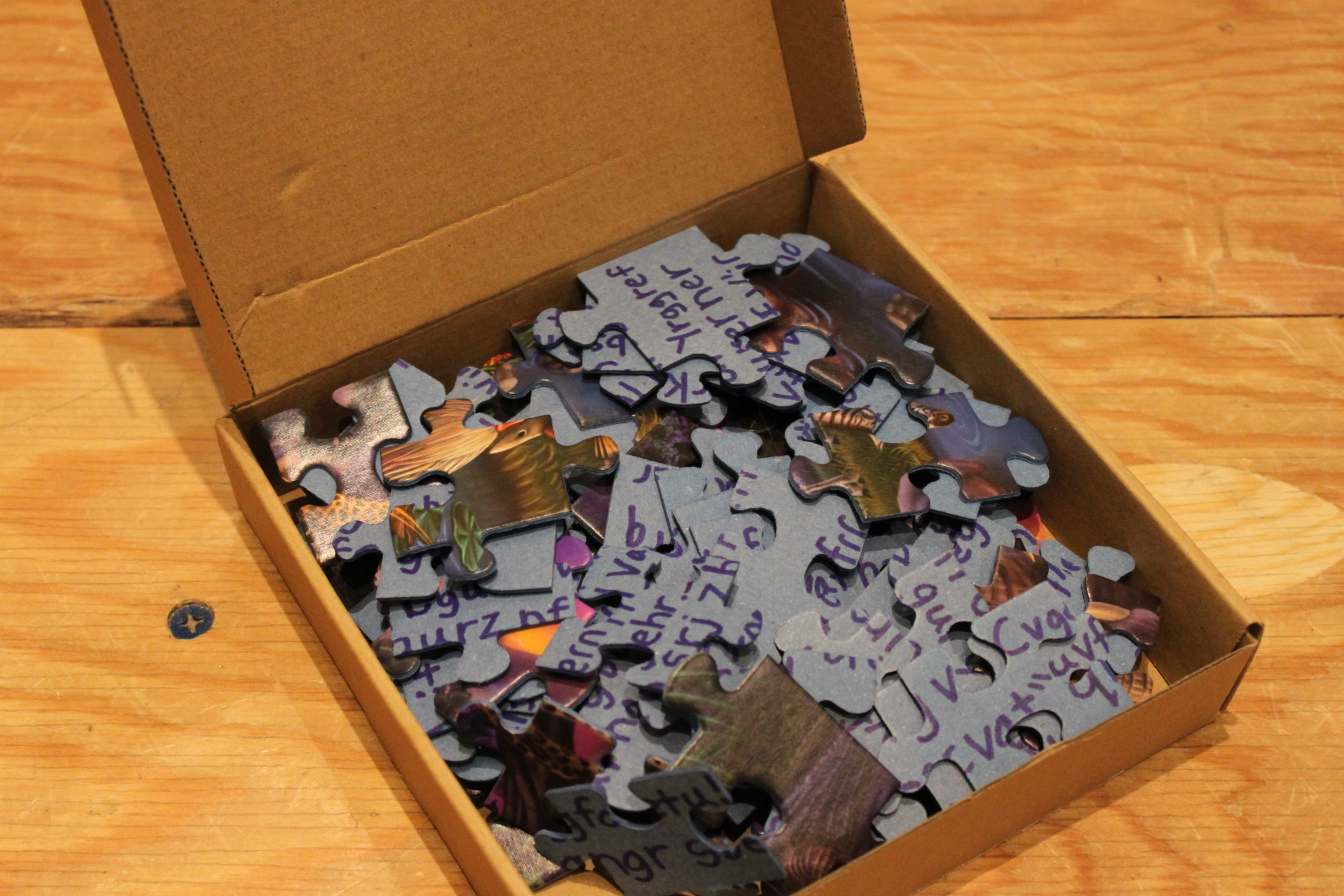 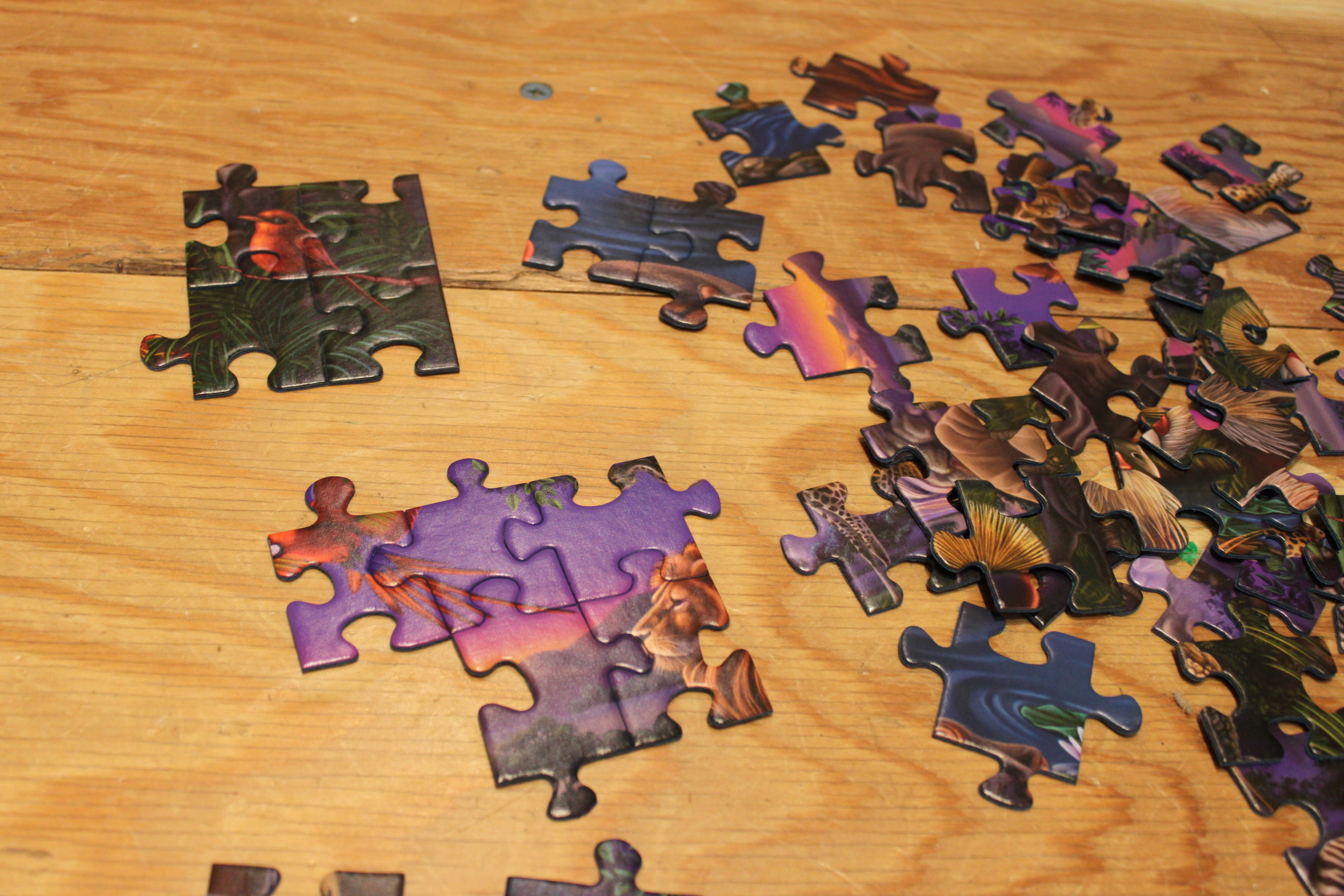 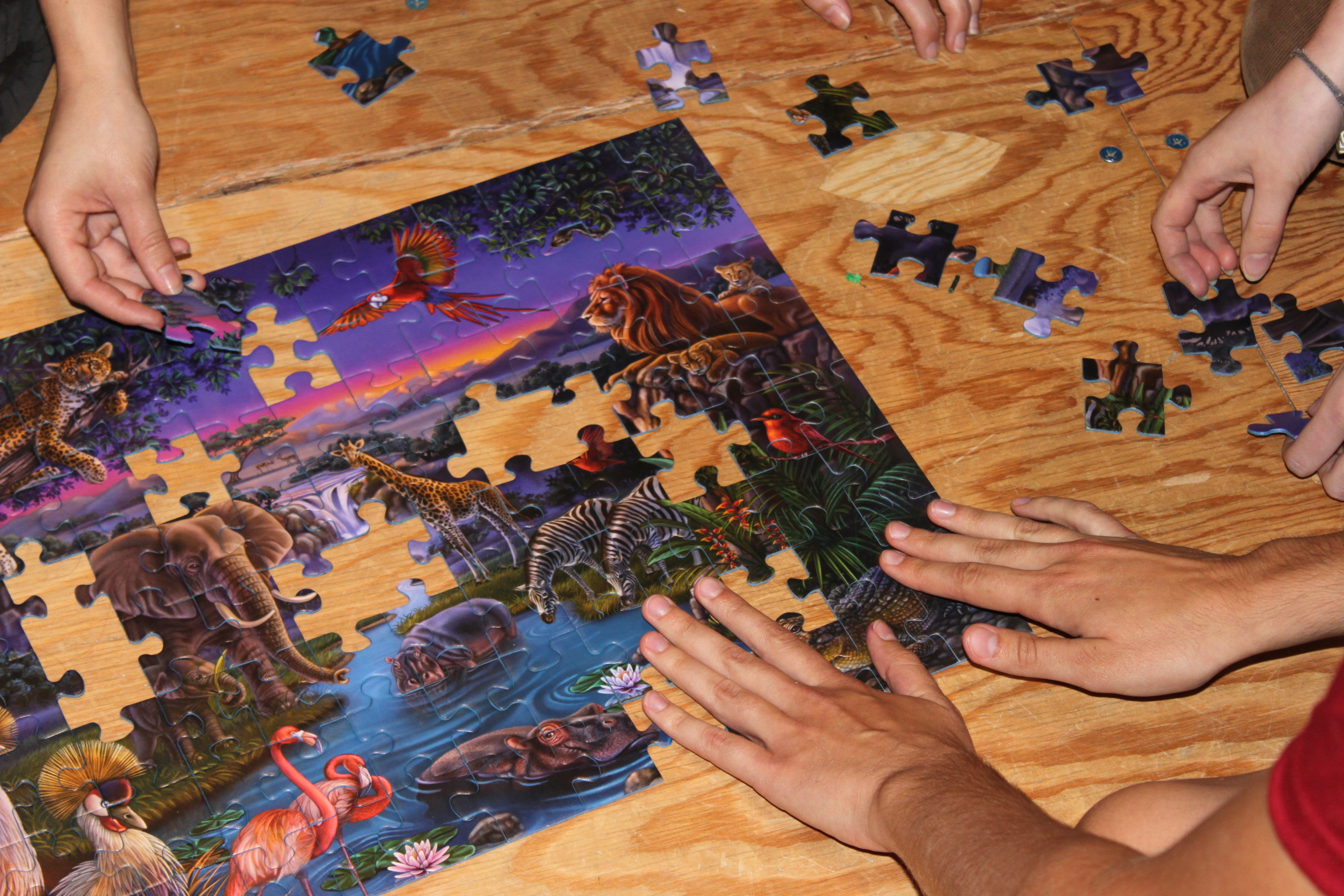 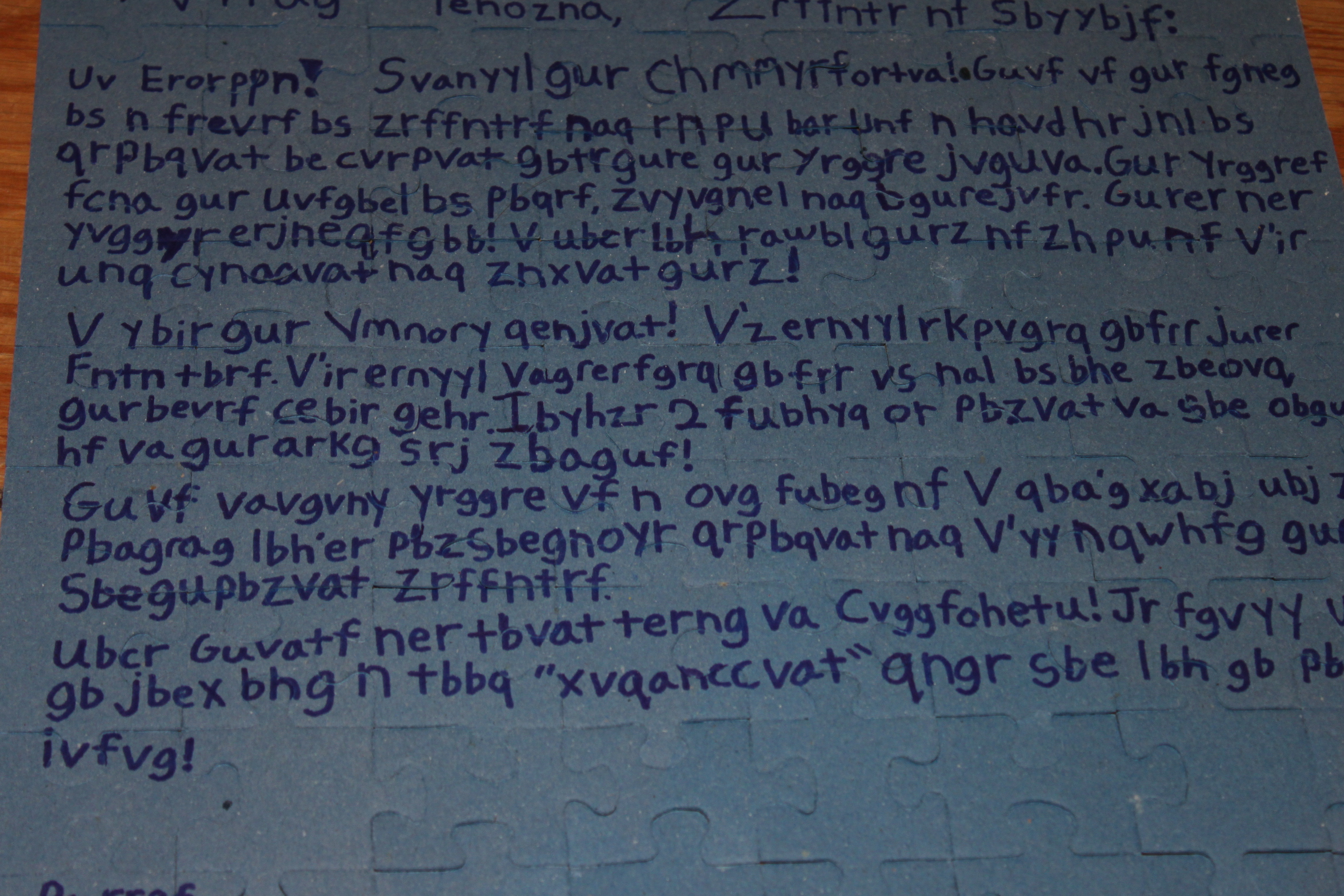 Hint: Assembling a puzzle picture-side up is much easier than assembling it message-side up. But it then has to be flipped over to see, and solve, the encrypted message. To flip it over without losing pieces, assemble the puzzle on top of something flat and easy to move, like a piece of cardboard. When you're finished, cover the whole thing with another flat piece. Flip the entire cardboard-and-puzzle sandwich over to reveal the message on the back!

Taking It Further: Spacing
Make your child's cipher even more difficult to solve by having him change the spacing of the letters. If the person looking at his encoded message sees the same word in several places, she might be able to figure out that it means "the" or "and" or another common word. Writing the letters in small, equally-sized groups will make it impossible to tell where each word begins and ends. After decoding the letters, the solver then has to rearrange the deciphered letters back into words – making it a second puzzle to solve. 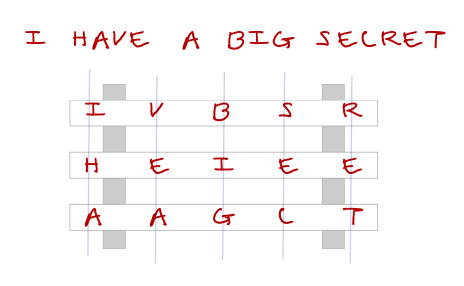 
Step 1. The rails of a split-rail fence are the long pieces that run parallel to the ground and the posts run straight up and down. Draw a fence form with rails and posts. To encrypt your message, write it one letter at a time down the posts of the fence, moving up to the top of the next post when you reach the bottom. 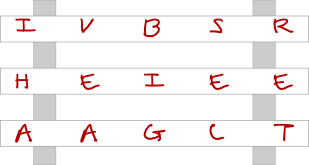 To decode the message, have your child separate it into as many sections (in this example, three), each encrypted word across a fence rail, and read down the fence "posts," left to right. Don't forget to tell the person decoding the message how many rails are in the "fence" that your child used!

Hint: If you combine the techniques of the Caesar Cipher, the Rail Fencer Cipher, changing the space, and using a jigsaw puzzle in different ways, your child's encoded message will be much safer from prying eyes. And fun to solve!