Shortly before I became pregnant with my first child, my husband and I went to Japan. Eating noodles in Kyoto, we watched out the window as schoolchildren skipped through the rain. “Let’s take our kids here someday,” I said. “We’ll show them the world.”

Now, seven years later, we have two children and two expired passports. Recently my husband asked if I was game for a family weekend at the beach and I said, “Absolutely not.” Just the idea of packing filled me with terror.

That anxiety is common among parents. (Who hasn’t broken into a cold sweat worrying that their child will turn into a banshee as the plane lifts off?) Still, plenty of people gallivant around with kids in tow. I turned to those courageous specimens for advice on traveling with little ones, starting with Mara Gorman, author of The Family Traveler’s Handbook, who has logged frequent flyer miles with her sons, 9 and 12, since they were infants.

“Relax,” she says. “If you expect that things will go well, most of the time they will. Maybe not exactly as you planned, but the time spent together will still be rewarding.” In other words, don’t let fear of imperfections deter you. An adventure is, after all, an adventure. 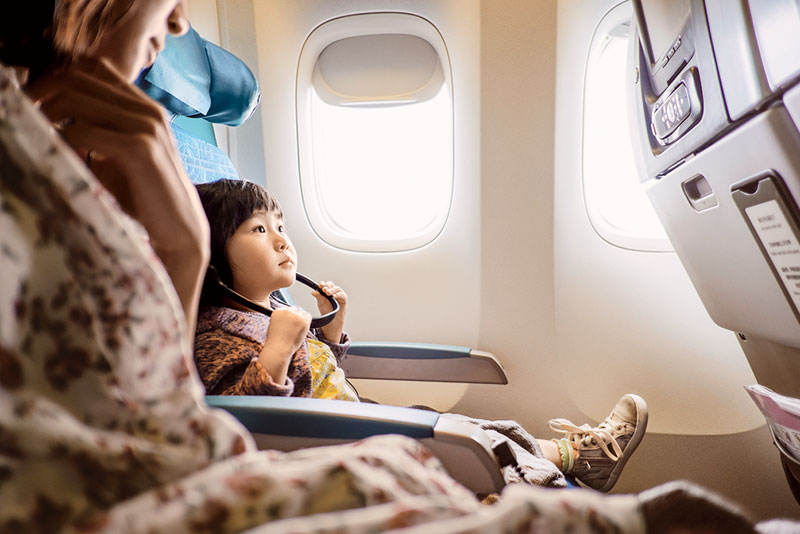 To me, even a two-hour fight prompts dread. Meanwhile, some folks don’t think twice about flying across several time zones. What tricks do these parental ninjas employ?

For one thing, Gorman suggests making the airport part of the trip. (Most of the major ones now have kid-centric play areas.) Arrive early so kids can run around and expend energy.

Another tip: Though early boarding for families is seen as a perk, you should aim to be among the last on the plane. “The less time kids are stuck in their seats, the better,” Gorman says. (Do board early, however, if that’s the only way to ensure you’re all sitting together.)

What about when an adult seatmate shoots you the stink eye? “Introduce yourself and say that you’re going to try to keep the kids under control — it diffuses any tension right away,” says Rainer Jenss, who traveled the world for more than a year with his wife and two sons, then ages 8 and 11. If it gets really bad, you can always buy your seatmate a drink.

Jenss, founder of Familytravel.org, also recommends carrying wrapped treats (opening them is part of the fun) like puzzles. Let kids have one at the start of the flight and promise to dole the rest out at intervals if they behave.

PLUS: 5 STRESS-FREE TIPS FOR FLYING WITH A TODDLER

Offer Meal Options
What do globetrotting parents with picky eaters do… learn to say “noodles with butter but not twisty ones” in six languages?

Actually, they just plan better than most of us. That means scanning menus online ahead of time to pinpoint kid-friendly standbys and having everyone choose what they want to order before arriving at the eatery, to shorten sitting-still time.

When it comes to trying unfamiliar local cuisine, make it an adventure. “Go to an exotic restaurant; the kids will get a kick out of it,” Jenss says. “With Asian food, for example, they’ll want to try the chopsticks to see if they can do it.”

Just as you would at home, model sampling dishes without forcing the issue. Advises Jenss: “Say, ‘Whoa! This is an octopus! I’m going to eat it; are you?’” Curiosity may get the better of them!

If your brood isn’t that intrepid, find a diner. “Eating breakfast for dinner is fun for kids,” notes Gorman. It’s also smart to visit a local market early on and load up on high-protein snacks.

Always carry nibbles and water. That way, you don’t have to stress if little ones skip a meal. “Just keep them hydrated,” says Jenss. “Worse comes to worst, order them a dessert.”

PLUS: MORE SANITY-SAVING TIPS FOR TRAVELING WITH PRESCHOOLERS 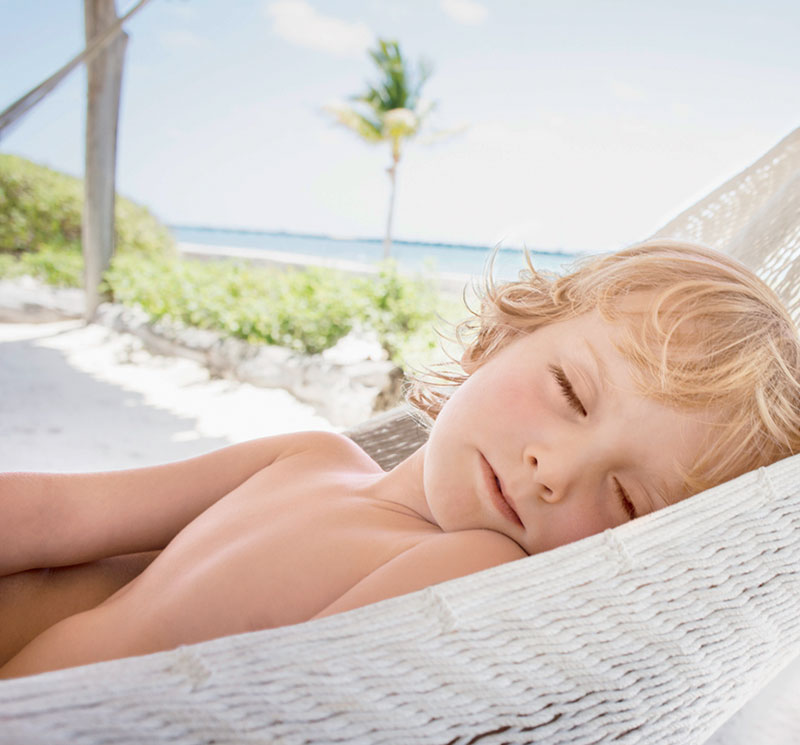 See Less
Well-traveled parents agree: You’re better off doing less and providing kids some normalcy (for example, their regular nap). A good rule of thumb is to visit one attraction per day, no more. (Have a backup in case your destination turns out to be less fun than advertised.) That rule isn’t just for the kids’ benefit. “Spending more time in fewer places makes a trip more relaxing for everyone,” Jenss notes.

It’s worked for Laura Hay-Hamilton, who’s RVing around the country with her two sons. She creates continuity with the “4 × 4 plan.” The family travels four hours or fewer at a time and stays put for four days, enough time to appreciate each spot without making the trip feel like a slog. “It helps the kids know what to expect,” she says. (Find more tips at Hamiltonmodernnomads.blogspot.com.)

Honoring your kids’ natural rhythms will also spare you pain. If you know they do best with physical activity first thing, plan your hike for the morning. If they’re usually low-energy upon waking, don’t sign up for the 8:00 a.m. tour.

Despite your best efforts, though, you will likely face moments when the kids just don’t want to do anything. You may have a day when your big activity is just hitting the hotel pool. And that’s okay, says Gorman: “In those moments, it’s your job to let some things go.”

PLUS: A PARENT'S GUIDE TO PASSPORTS FOR KIDS

Let Kids Take Turns
Balancing sibling wants is another key process that should start early. While shaping your itinerary, consider each child’s interests. Then, give them some ownership over the trip by presenting options and letting them choose.

Globetrotting mother of six Amanda Mays kept peace between her equine enthusiast and her World War II buff by letting them know ahead of time that their trip would involve seeing both Lipizzaner stallions and battlefields. Remind little ones: “We’re taking a boat ride today because your brother really wanted to; tomorrow, we’ll go to the park you picked.” Knowing that their turn is coming helps kids endure a sibling’s choice of activity.

“Most of the time when there’s a disagreement, the kids have teamed up against us and tried to veto some plan,” says Bliss Broyard, who chronicles her trip around the world with her two children at 4intransit.com. She’s learned that sometimes it’s smarter not to announce the schedule to avoid building up resistance. Kids love to have some agency, but only offer them the choices you actually want them to make. Not, “We’d like to take the train this morning, okay?” But rather, “Do you want to sit in the front of the train or the back?”

Sometimes it makes the most sense to divide and conquer. “My husband and my older son are more into sports, and my younger son couldn’t care less, so he and I will go to a museum while they’re at a game,” says Gorman. “The kids get space and we regroup later.”

On the other hand, you may just find that sibs get along better on the road than at home — that’s something I’ve learned on my own travels. Even day trips have the power to magically transform kids into an away-team of explorers, rather than opposing sides warring over resources at home.

PLUS: HOW TO TELL KIDS YOU'RE GOING ON A BIG TRIP