In many U.S. households, the second Sunday in May begins with breakfast in bed, a bouquet of flowers, homemade cards, and other tokens of affection for mom. Mother’s Day — our country’s version, at least — has been an official holiday since 1914. In other corners of the globe, honoring Mom is a rite grounded in local traditions and customs — some ancient, some surprisingly new.

"Most cultures celebrate mothers because they are traditionally the main caregiver, which comes with great responsibility," says Mei-Ling Hopgood, author of How Eskimos Keep Their Babies Warm: And Other Adventures in Parenting. Here, we take you on a quick trip around the world to discover how moms in five different countries are celebrated and to provide some inspiration for your own day. Share our "bring it home" ideas with your family or use them to celebrate your own mom.

India: 10-Day Festival
Each October, Hindus honor Durga, the goddess of mothers, during the 10-day festival known as Durga Puja. The celebration is thought to date back to the sixteenth century and is considered both a religious ceremony and a time for family reunions. One story tells of Durga returning to her parents’ home to show off her own children. Families spend weeks preparing food, gathering gifts, and decorating their homes for the festival.

Bring it home: Visit other moms you know, among both friends and family, and bring home-cooked goods to share.

Japan: The Right Flowers
Following World War II, a version of Mother’s Day grew popular as a way of comforting mothers who had lost sons to the war. You’ll see carnations presented around this March holiday, as they symbolize the sweetness and endurance of motherhood in Japanese culture. Originally, children gave a red carnation to a living mother and displayed a white one if their mother had died. Now, white has become the traditional color.

Bring it home: Thank the moms in your community who help your family by writing notes of gratitude. Tie the notes to white carnations and leave the flowers on the moms’ doorsteps. 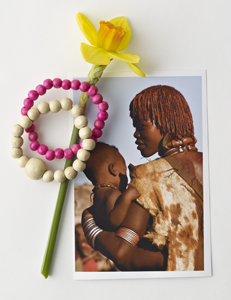 Ethiopia: Sing Along!
The Antrosht festival, observed at the end of the rainy season in early fall, is dedicated to moms. After the weather clears for good, family members from all over flock to their homes for a large meal and celebration. Daughters traditionally bring vegetables and cheese, while sons supply meat. Together, they prepare a meat hash and sing and perform dances that tell stories of family heroes.

Bring it home: Share stories about all the women in your family. Go through your photo albums together and create a personal scrapbook of those special moms who’ve come before you.

United Kingdom: A Church Custom
Mothering Sunday" falls on the fourth Sunday of Lent. Back in the 1700s, the day was marked by young house servants returning home to spend time with their mothers. That custom evolved from an earlier one in which families who had moved away would return to the original church they attended. Today, the holiday remains grounded in religion, with many churches handing out daffodils for children to give to Mom. Traditionally, girls also bake a fruitcake for their mothers.

Bring it home: Ask your family to celebrate you on Mother's Day by launching a new tradition based on one from your own childhood.

France: Medals For Mom
In 1920, the government of France began awarding medals to mothers of large families in gratitude for helping rebuild the population after so many lives were lost in World War I. After the second World War, the government declared the last Sunday in May to be the Day of Mothers. The traditional gift is now a flower-shaped cake.

Bring it home: Awarding medals for bringing children into the world is obviously outdated, but expressing gratitude never goes out of style — especially when you’re demonstrating ways to express it to your children. Share your thankfulness for each family member at dinner and ask them each to do the same.

Plus:
13 cool camera tricks from professional photographers
Indulge yourself: 5 essential movies recommended for moms, by moms