When Meredith Donovan noticed her 6-year-old’s breast buds, she dismissed them as baby fat. But a few months later, when Donovan glimpsed hair sprouting from Becca’s armpits, alarm bells went of. The first grader was referred to an endocrinologist, who noticed the biggest red flag of all. “Becca had grown five inches in one year and was suddenly a head taller than everyone in her class,” the Allentown, PA, mom recalls. “No one ever tells you that growing more than 2½ inches a year is not normal at 6.” After blood work and X-rays, the endocrinologist confirmed that her daughter’s bone age — a way to measure a child’s skeletal development — was that of a girl nearly 11 and that her hormones had begun to rise. Diagnosis: precocious puberty.

Breast buds are just one sign of puberty (see “5 Red Flags,” below). While most of us got them around 11, the average girl today develops them when she is 8 or 9, and cases in girls Becca’s age are increasing. Boys, who’ve historically begun puberty around 11½, now typically enter this stage by their 10th birthday. Although hitting puberty in grade school might be the average now, experts aren’t convinced it’s normal or healthy.

Multiple lifestyle factors are causing kids to develop earlier. “We know the genetics of human beings have not changed, so it has to be environmental. Nutrition, stress, and the prevalence of endocrine disrupting chemicals in our society are all having an impact,” says Marcia E. Herman-Giddens, Dr.PH., an adjunct professor at the University of North Carolina School of Public Health, Chapel Hill, and the author of numerous studies on early puberty in both boys and girls. That impact has emotional ramifications as well as physical ones.

The Challenges
No matter when puberty starts, the flood of hormones adds a new layer of intensity to most situations. But when it starts at age 8 (or sooner) kids haven’t yet developed the ability to cope with their feelings — or think through the consequences of their actions.

“Kids who mature early may also start to gravitate toward older peers, but those social interactions can be complicated and confusing for them,” notes Julianna Deardorff, Ph.D., a San Francisco Bay–area psychologist and co-author of The New Puberty: How to Navigate Early Development in Today’s Girls.

For instance, a 10-year-old who looks like a teen may feel pressured to experiment with sex or alcohol. And because she’s so driven to seek her older friends’ approval, she can overreact when she feels left out of their activities and beat herself up. That’s one reason girls going through early puberty may have a higher risk of eating disorders, depression, and anxiety, notes Dr. Deardorff.

Boys, on the other hand, tend to be less awkward about this transition; after all, having muscles is a sign of prestige, Dr. Herman-Giddens says. But parents still need to look out for an increased interest in sex, which is spurred by higher testosterone levels, she adds.

Helping Kids Cope
Parents can regain some control over the situation, no matter what age their child goes through puberty. The key: remaining calm and maintaining a warm, supportive relationship. When it happens too soon, consider these steps:

See a Doctor
For kids younger than 7, and girls who start their periods before age 10, there are two prescription medications that can stop the pituitary gland from producing the hormones that trigger puberty. However, always consult with your pediatrician before choosing any serious medical course of action.

Explain the Situation — Gradually
“We kept it very simple,” says Donovan. “We told Becca, ‘Your body thinks you are older than you are.’ We didn’t give her any info about periods or sex at first.”

Smart move, say experts. Start the discussion with hygiene, which is a less threatening topic, explains Louise Greenspan, M.D., a pediatric endocrinologist at Kaiser Permanente and co-author of The New Puberty. That’s what Lori Allen of Murfreesboro, TN, did when her daughter, Jocelyn, developed body odor and acne at 8. “Rather than single her out, I told her and her twin brother, ‘You both have gotten to the age where you need to wash your face with this soap and use this deodorant.’”

Progress to breast buds and pubic hair only when they appear. “Explain that these changes happen to everyone, just at different times, and she is just experiencing them earlier than other kids,” suggests Dr. Green span. “The most important message you want to get across is that your child is normal and her body is normal. Repeat this advice as often as necessary, assuring your child that ‘other kids will catch up.’”

Monitor But Don’t Hover
Research shows that kids do better when parents pay attention to their whereabouts and friendships. Avoid turning into a helicopter parent, though — it’s essential to build your child’s independence as well as trust.

Start by getting to know your child’s friends. When they visit, Dr. Deardorff recommends staying within earshot and checking in frequently to bring them a healthy snack. Use the same strategy when your child is alone in his room — pop in to chat. Staying physically close by helps keep the connection going; it also clues you in to any potential problems, whether it’s backstabbing among friends or brooding.

Teach Talking Points
“The brain’s frontal lobe helps to manage emotions, but it isn’t yet mature enough in kids to handle the emotional roller coaster, so you’ll need to act as your child’s frontal lobe,” explains Dr. Deardorf. Say, for example, your 7-year-old isn’t invited to a birthday party — it’s something many kids experience, but the added hormones intensify your child’s anger or sadness. Talk it through, and help her find other options: “I know your feelings are hurt. Maybe there’s something you’d like to do that afternoon, and you could invite Emily if she wasn’t invited either.” As she gets older, guide her to come up with her own ideas: “What do you think is the best thing to do now?”

It’s also critical to help your child label complicated emotions. You realize you’re frustrated when a project isn’t going as planned, but frustrated kids only know they can’t stop crying. So ask questions that give her words for what she’s experiencing (“Did Sophia make you feel left out?”).

Step in if You Suspect Teasing
If your child is teased about his developing body, don’t take it lightly. “It’s important to get the message across early, with both boys and girls, that body shaming is not acceptable under any circumstances,” Dr. Deardorf says. “Tell your child to immediately report the incident to you, the teacher, or another trustworthy adult. Also teach kids to say to the person teasing them ‘That’s not okay,’ and walk away.”

Tap Into the Power of a Book
As important as it is to keep the conversation going, sometimes your child should do some sleuthing on her own. A kid-friendly book (try It’s So Amazing: A Book About Eggs, Sperm, Birth, Babies, and Families or American Girl’s The Care and Keeping of You) can nip the temptation to search for info online. This kind of knowledge helped Jocelyn Allen accept what was happening. Her mom explains: “As Jocelyn began to understand puberty, she became very matter-of-fact about the whole process. She was even able to explain it to her friends — and handle every conversation beautifully.” 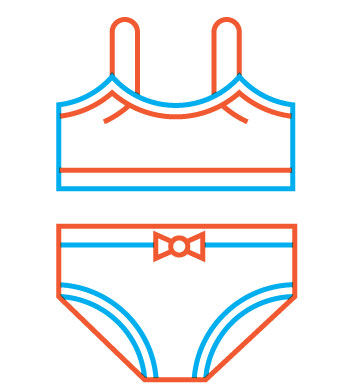 • The development of breasts or pubic hair at age 7 or 8 in girls; pubic hair in boys at age 9

NEXT: POSSIBLE CAUSES OF PRECOCIOUS PUBERTY

*Some parents’ and children’s names and location have been changed.