The Eloise Series by Kay Thompson
Few heroines have charmed kids as much as this mischievous resident of The Plaza hotel. (Her portrait hangs in the lobby.) Book the Eloise Afernoon Tea, served every day between noon and 5 p.m. in The Palm Court. (The menu includes pink cotton candy and lemonade.) Don’t depart without visiting the Eloise Boutique, on the lower level, where kids can play dress-up. If you’re staying at the hotel, reserve a spot at one of the Eloise craft activities and join a scavenger hunt, created this year to mark the frst book’s 60th anniversary. Simon & Schuster, ages 6 and up

The Percy Jackson Series by Rick Riordan
Fans will enjoy venturing to the top of the Empire State Building, the home of Mount Olympus in the novels. Next stop: The Metropolitan Museum of Art, where Percy Jackson goes on a feld trip to “look at ancient Greek and Roman stuf.” Pick up the guide based on the book to see statues of heroes such as Hercules, as well as body armor. Then take the subway to Astoria, Queens, the heart of New York City’s Greek community. Dine at seafood mecca Taverna Kyclades, which also ofers kid faves like spaghetti and hamburgers. Disney-Hyperion, ages 10 and up

PLUS: BOOKS THAT TEACH KIDS ABOUT CITIES 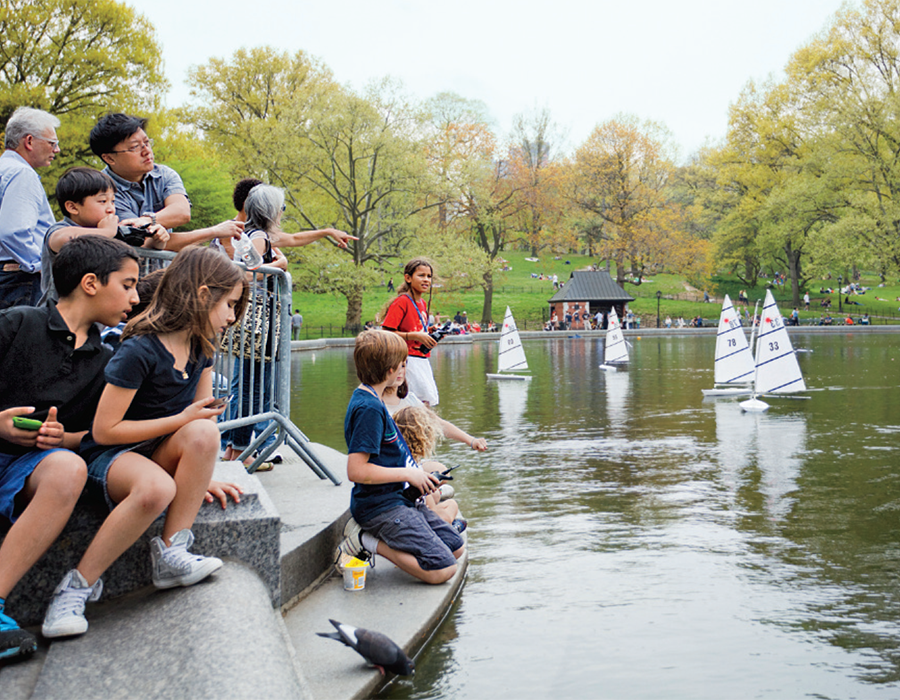 Stuart Little by E. B. White
Who can forget the tale of Stuart, a tiny mouse child born to a well-todo Manhattan family? Stroll up Fifth Avenue (or ride the bus, like Stuart!) toward Central Park to take part in one of the book’s highlights — the toy sailboat races. They’re held every Saturday at 10 a.m. from April through October at Conservatory Water, inside the park from East 72nd to 75th streets. Bring your own remote-controlled sailboat to race or rent one. (Nearby, you can visit the bronze statue of Alice from Alice’s Adventures in Wonderland, another kid-lit fave.) Don’t leave without riding the famous Central Park Carousel (open April through November), one of the largest in the country. The drawings in Stuart Little also depict Gramercy Park (private and gated, but with a sidewalk around it that’s wide enough for strollers) and the MetLife Tower, so head downtown to check those out. Top of the day with a mouse-approved meal at Murray’s Cheese Bar in the West Village, where the menu includes grilled cheese, mac ’n’ cheese, and (yes!) cheese ice cream. HarperCollins, ages 8 and up

PLUS: 3 MORE LITERARY LOCATIONS TO VISIT WITH KIDS

Paddington Series by Michael Bond
Ever since the appearance of A Bear Called Paddington, in 1958, the teddy in wellies has delighted kids and parents alike. Begin your tour at historic Paddington Station, where the little guy was found (and got his name) in the frst book. Don’t forget to snap a selfie with the bronze Paddington statue on Platform 1. Then wander over to famed Portobello Road in Notting Hill; the bear spent many afernoons here, shopping and chatting with his friend, antiques dealer Mr. Gruber. (You can hunt for treasures at Alice’s Antiques, which stood in for Mr. Gruber’s shop in the Paddington flm.) Make time for a favorite treat: marmalade! Follow your nose to Southwark Street, right at the London Bridge tube station, where Borough Market’s delicious food stalls await. Fix sandwiches à la Paddington with a jar of orange marmalade (the award-winning Jill’s Natural Preserves is a vendor on alternate Saturdays) and a fresh loaf from Bread Ahead bakery. HarperCollins, ages 8 and up

The Harry Potter Series by J. K. Rowling
Muggles will love immersing themselves in the boy wizard’s world. Start by strolling the cobbled walkways of Leadenhall Market, which doubled for Diagon Alley in the films. You can browse among sellers hawking chocolate, cheese, flowers, and more (no bat spleens or eels’ eyes for sale, alas). From there, head over to the London Zoo. The grounds, which date to 1828, house more than 750 species, but Potter fans should stop at the Reptile House, where Harry first discovered he could talk with snakes. Allow a day for the trip’s highlight: a visit to Warner Bros. Studios in Leavesden (20 miles northwest of London), where all eight Harry Potter films were shot. Kids can explore Harry’s house on Privet Drive, board the Hogwarts Express from platform 9¾, and even enjoy a butterbeer! (Tickets are not sold on-site; purchase at Wbstudiotour.co.uk.) Scholastic, ages 9 and up

The Complete Tales by Beatrix Potter
“Once upon a time there were four little rabbits, and their names were Flopsy, Mopsy, Cottontail, and Peter.” With that, Beatrix Potter began 1902’s The Tale of Peter Rabbit. You’ll find the original artwork and manuscript for the story and some of Potter’s 23 other “little tales” at the Victoria & Albert Museum. Fans should also spend an afternoon in Gloucester (about two hours from London) to visit the 17th-century building depicted in The Tailor of Gloucester (the inside is a mini museum). Then take an overnight trip to the English Lake District (five hours from London) to experience the World of Beatrix Potter. There, kids can play in Peter Rabbit’s garden and see Mrs. Tiggy-Winkle’s kitchen. (An on-site café serves lunch and treats.) Be sure to tour Hill Top, Potter’s farm, which figures in The Tale of Jemima Puddle-Duck and other stories. Penguin, ages 3 and up

The Sixty-Eight Rooms by Marianne Malone
Kids may not stumble upon a magic key like the heroes of this mystery, but they’ll be enchanted by a visit to the Art Institute of Chicago. Head straight to the Thorne Rooms, a collection of 68 meticulously detailed miniature spaces. “At the start of the story, a class comes here on a field trip,” explains the rooms’ caretaker, Lindsay Mican Morgan. “They’re studying Africa, so they stop at the African galleries to see the headdress and animal sculptures. But the characters spend most of the book in the Thorne Rooms.” Ask for a guide to a book-themed scavenger hunt. Random House, ages 8 and up

Chasing Vermeer by Blue Balliett
The Art Institute is also the jumping-of point for this sleuth novel, which follows two kids, Calder and Petra, as they try to solve the disappearance of a famous painting. Author Blue Balliett suggests viewing Auguste Bernard’s work, L’Art d’aimer, which captures Calder’s eye early in the story. Then head to the protagonists’ favorite hood, Hyde Park, and stop in at Powell’s Books, on 57th Street. “There’s often a box of free books outside the door,” notes Balliett. Continue on to Ida Noyes Hall, a part of the University of Chicago that’s open to the public during the day. “It’s thinly disguised as Delia Dell Hall in Vermeer,” reveals Balliett. Ready to eat? Try Medici on 57th, and save room for dessert. Says Balliett: “Every kid in town knows how good the brownies and chocolate croissants are!” Scholastic, ages 8 and up

The Great Fire by Jim Murphy
This nonfiction Newbery Honor read provides accounts of the 1871 fire, which destroyed more than three square miles of the city. To learn more about the disaster, take one of O’Leary’s Fire Tours—they’re conducted via an antique fire truck! If you prefer to navigate on your own, start at the former location of the O’Leary House (now the Chicago Fire Academy), where myth holds that a cow kicked over a kerosene lamp and started the blaze. Then walk to the Old Chicago Water Tower District, along the city’s famous Magnificent Mile shopping area. The water tower itself, finished in 1869, is one of the few buildings to survive the fire. From there, follow any of the strolls at Greatchicagofre.org. Scholastic, ages 8 and up

PLUS: HISTORICAL TRIPS FOR KIDS