Step 1: Share the Q&A with Ann M. Martin from the back of the After Words edition of A Dog's Life. You might write each question on an index card, pass the cards out to students, and have one student act as Ann M. Martin. Invite students to ask "Martin" their questions. Then encourage Martin to read aloud the corresponding responses from the book. If you don't have the After Words edition of the book, you can share the following excerpt from the Q&A:

Q: Was there anything particularly challenging about writing Squirrel's story?
A: Actually, writing from a dog's point of view gave me certain liberties. For instance, in order for Squirrel to tell her own story, she had to have acquired language, so I had the fun of imagining how that might have happened. On the other hand, dogs can't communicate, at least not the way Squirrel does, but I wanted her story to be believable; she still had to be a realistic dog. I did some research on dog anatomy and behavior, and of course I was able to observe Sadie, but even so, I made mistakes. For example, about a third of the way through A Dog's Life, I remembered that dogs are partially color-blind, so I had to go back to the beginning of the story and take out all the references to colors that Squirrel wouldn't be able to see. Details like that took me by surprise more than once.

Q: What advice can you give to aspiring writers who want to write a story from an animal's point of view but maybe don't know where to begin?
A: I think it's important to focus first on the story you want to tell, and not necessarily on the fact that you'll be writing from an animal's point of view. In other words, do you want to write an adventure story? Or a fantasy in which the animals have special powers or can talk? Remember, too, that the animal can tell its own story, as Squirrel did (in her own words), or a narrator can tell the animal's story, so think about whether you want to write in the first person or the third person. This should help you figure out where to begin!

Discuss with students the challenges the author faced as she worked on writing a story from a dog's perspective. Have they ever observed an animal and wondered what it was thinking? Or tried to predict an animal's behavior in different situations? Tell students that as Martin wrote Squirrel's story, she used her imagination to fill in the dog's thoughts and behaviors, but she also based a lot of Squirrel's characteristics on how her own dog behaved and on true dog facts. For example, since dogs are partially color-blind, she allowed Squirrel to see only colors that dogs could actually see.

Step 2: Ask students to tell what words in A Dog's Life hint that the storyteller is a character in the story. After sharing their ideas, have students turn to any page in the book. Ask them to count how many times I, me, and my appear on the page. What do their findings suggest? Explain that a story told from a first-person point of view is filled with these pronouns because the storyteller is telling the story from his or her personal observations, opinions, and experiences.

Step 3: Ask for a show of hands to find out which students own pets. Invite them to share about the kind of pet they own. If you have students who are not pet owners, ask them to tell what kind of pet they would like to have. Then ask students to imagine they are their pet (or would-be pet). As you describe different situations or scenarios, encourage students to mentally try to think and act as their pet might. For example, ask them to imagine how their pet might respond and what it might think if an unfamiliar person reached out to touch it, or if its favorite treat was just out of its reach. Ask volunteers to describe their pet's possible responses, making sure they share from the animal's perspective.

Step 4: After students gain some experience in viewing life from their pet's perspective, have them write a story about their pet's life. (If students don't have a pet, encourage them to create a story about a friend's or neighbor's pet.) Instruct them to tell the story using their pet's voice. To keep the story brief and interesting, encourage them to include no more than 4–5 highlights about the animal's life. When finished, collect their stories. Ask students to bring in a photograph or drawing of the pet in their story the next day.

Step 5: Allow time for students to share their pet photos. Afterward, pass out their pet stories. Have students reread their story to check for correct spelling, grammar, and mechanics and to make sure it's written in their pet's voice. Encourage them to make any necessary corrections or changes. After their final drafts are ready, have them add their pet photo and story to a classroom display titled "A Pet's Point of View."

Step 6: Gather students around a computer or use a projector to project Create a Tale! from A Dog's Life: A Flashlight Readers Activity for the whole class to see. Introduce the activity, review its objective, and read the instructions together. Explain that students will choose from a number of characters, settings, and objects to create up to five scenes to write a story about. After they set up each scene, they can choose a story starter and the point of view from which they want to write the story. Or they can create their own story starter for each scene. Students can choose between a first-person or omniscient POV.

Step 7: To demonstrate how to set up a scene, click the Begin button to advance to Scene 1. Working through one element at a time, review all the images for settings, characters, objects, and bubbles. Show students how to click and drag the items to the scene frame and then use the command buttons at the top left to adjust the size, orientation, and position of the item. Explain that they should click the trash can to delete any unwanted items. Choose several kinds of bubbles, and demonstrate how to insert text in the bubbles. Point out that each bubble uses a specific size and kind of font. When the scene is set up, click Continue to advance to the next screen.

Step 8: Point out the scene on the left side of the screen. Tell students that this is the scene created in the previous step. They can edit their scene from this screen and choose a story starter. Then click on "Want to know more about point of view?" and review the pop-up screen with students to make sure they understand the three different types of point of view (POV). Explain that this screen will be available each time they advance to a writing screen, so they can click on it and review the POVs as a reminder if needed. Close the pop-up screen, and select a story starter and point of view from the choices on the lower left side. Your choice will appear in the box on the right. Show students how to add their text to continue the story using a story starter. Then clear the story starter and show them how they can create their own story starter by clicking on the box and typing in their text.

Step 9: After completing each scene and text, click Create Next Scene to set up the next scene of the story. When you have created several scenes and text, click My Story Is Complete. Tell students they can edit each scene or story on this screen and then print out each page. They also have the option to begin a new story. Print one or two scenes to show them how their completed scenes might look.

Step 10: Before sending students to the computers, provide copies of A Dog's Life Vocabulary Boosters. Review the words and meanings with students. Tell them they might use words from the list for ideas and inspiration in their stories.

Step 11: Distribute copies of the Sequence of Events printable. Remind students that they can create up to five scenes for their story. They should treat each scene as if it is a different chapter. Then have them use the diagram to develop a plan for the different scenes for their story. As they work out their plan, encourage students to include which characters, setting, and other elements will be featured in each scene, as well as the action or dialogue that might take place. Have them try to sequence the scenes so that they can be used to create a fluent story. Keep copies of the book on hand for students to refer to as needed.

Step 12: After planning the sequence of events to be represented in their story scenes, invite students to the computers to individually to create their own stories. Have them refer to their Sequence of Events printable to set up the first scene. Then have them choose a story starter and POV, or create their own story starter for the scene. Instruct them to insert their text for that scene, using the POV selected for telling the story. After completing the first scene, have students review their work for correct spelling, grammar, and mechanics, as well as the presentation and clarity of ideas and events. When they are satisfied with their work, have them advance to the second scene and repeat the process. When they have created all the scenes and text, have students print their stories.

Optional: If students printed black-and-white copies of their stories, invite them to add a little color with markers or crayons.

Step 13: Have students bind their pages between two construction-paper covers and title the front cover to create a book.

Step 14: Invite students to share their stories with one another. Later, place the books in your class library for students to enjoy over and over again.

Review each student's story for content and clarity of ideas, as well as correct spelling, punctuation, and grammar.

Dog's Life, A: The Autobiography of a Stray 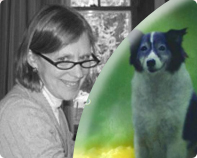 Scholastic offers students the unique opportunity to get the story behind A Dog's Life from the author, Ann M. Martin, herself!

This teacher's guide, which focuses on the book A Dog's Life by Ann M. Martin, challenges students to create stories from a first- or third-person point of view, make plot decisions, and examine the author's writing process.

Use these resources to teach students about folklore, have them analyze folktales that have been passed down from one generation to the next, and tell one of their own!

A Lucky Author Has a Dog
By
Mary Lyn Ray, Steven Henry
Grade
PreK-3
Hardcover Book
$12.74
From the Teacher Store