The activities in this lesson plan coordinate with the slide show in the "Ruby Bridges: A Simple Act of Courage" unit.

The activities can be taught in the suggested sequence, or they can be used individually as part of your teaching about the civil rights movement, Black History Month, or Women’s History.

The activities are aligned to the Common Core standards in English Language Arts, with a focus on core reading and writing skills.

Each session is intended to take approximately 40–45 minutes. You may want to combine activities to fit your schedule.

In this activity, students will circulate around the room interacting with one another to find vocabulary words that match the definitions on their vocabulary sheet.

As students enter the classroom, tape one vocabulary word from the Ruby Bridges Vocabulary Carousel: Word List printable on each student's back. Remind students not to peek at their words! Give each student a copy of the Ruby Bridges Vocabulary Carousel: Definitions printable. Have students walk around the room, reading the other students' words and determining which word fits with each definition — including the missing term they have on their back!

Each term will be used only once and should be marked on their sheets. After students have completed their sheets, they should return to their seats and, as a class, review their answers, discussing each term in greater depth.

To provide additional support, students may work in pairs or you may supply a shorter list or some clues.

As students view the slide show, have them write down a word they think best summarizes each historical image. Students should write down only one word per image, as they are generating a list of vocabulary to include in their later writing.

After the slide show, discuss what you’ve seen as a group, answering any questions students might have.

Now have students look at their completed vocabulary sheet from the Vocabulary Carousel activity and review the words.

Direct students to write a summary of the events in the slide show. Their 10- to 15-sentence summary should include the words from Vocabulary Carousel activity and the list of words they generated on their own while viewing the slide show.

Students who need extra support may benefit from sentence starters or having you help them arrange their words into categories.

You may challenge students to summarize the events in only one sentence or to use as many of their self-generated and vocabulary words as possible.

Text-Dependent Questions for Through My Eyes

Engage students in an active reading session of Ruby Bridges’s book Through My Eyes. The book is written in the first-person, but offers several vignettes other people’s perspectives. You can have students read the book independently prior to a class discussion or read it together as a class.

If you don’t have adequate time for the whole text, these sections are suggested:

When students read actively, they are working as they read. Students should annotate; have them make note of central ideas, questions they have about vocabulary, and feelings they have about the information. Pause students in their reading (or wait until everyone has finished) to discuss their annotations.

After the active reading session, have students answer these text-dependent questions, either in a group or in individual written responses.

In the preface, Ruby describes the 1950s and 1960s as important decades. For what reasons does she consider them to be important?

African Americans, after decades of terribly unjust treatment, were demanding equal treatment as American citizens. This included equal access to education. In 1954, the Supreme Court ruled in the case of Brown vs. Board of Education that “separate but equal” schooling was unconstitutional.

What is Ruby’s purpose for writing this book?

In writing her book, Ruby attempts to create a feeling of what life was like for African Americans in the South during the 1950s and 1960s. She wanted to share her experience, so her readers would have a fuller understanding of the racial crisis in the South.

What was the initial process for integrating schools in New Orleans?

How did the school board build in a way for schools to remain segregated?

The city tested African American kindergarten students to determine which schools they would attend. The test for the kindergartners was set up to make African American students fail. Once they did, the all-white school board could argue that because the students did not qualify academically for the schools, the schools should not be required to enroll them.

Why did some African American people not want to integrate schools?

Some African American parents were afraid for their children. Ruby’s father was among them. He wanted to protect Ruby from dangerous, angry protestors. He thought things would never change.

What role did Judge J. Skelly Wright play in the integration of schools in New Orleans?

Louisiana state legislators passed laws that made integration illegal. Judge Wright found these laws unconstitutional. He set an integration deadline of November 14, 1960 for New Orleans schools. He also asked that federal marshals be sent to New Orleans to protect African Americans students who were integrating schools.

Both The New York Times and Ruby describe her first entrance into the William Frantz Elementary School. How are the descriptions different?

Ruby writes that the building impressed her. She thought she must have been going to college. She remembers the crowd was very loud, and she thought it must be Mardi Gras. The New York Times describes Ruby holding her mother’s hand tightly and looking nervously at the crowd.

Why does Ruby describe her first day at William Frantz as “easy?” How was this viewpoint affected by her age?

Ruby had no academic responsibilities that day. She spent the whole day sitting in the office with her mother and waiting for the school day to end. To a six-year-old who didn’t fully understand what was happening, it may have seemed like an easy school day.

What was the protestors’ message to white families?

The protestors wanted to make sure white families boycotted the schools, rather than let their children attend an integrated school.

What was being in Mrs. Henry’s class at the William Frantz School like for Ruby?

Ruby was the only student in her class. She thought it was odd, but she enjoyed having Mrs. Henry’s full attention, and the two became very close. But Ruby was not allowed to go out for lunch or recess. Her entire day was spent inside her classroom. If she had to use the bathroom, the marshals walked with her down the hall.

What was the experience of integration at William Frantz like for Mrs. Henry, who was white?

At first, Mrs. Henry was excited live in New Orleans and return to teaching. She thought the South would be romantic, but her experience teaching at William Frantz made her lonely and upset. The other teachers made comments about her or refused to speak to her. Mrs. Henry also had to be secretive about her job because it was dangerous. Anti-integration protestors might take out their anger on her. She was not allowed to talk to Ruby’s family. She did not know whom she could trust besides her husband.

How did the experience make Ruby feel?

Ruby doesn’t write very much about fear in her story. It’s very likely she was fearful and stressed, however, because by winter she couldn’t sleep without nightmares. She also stopped eating lunch because she felt so lonely.

What does Ruby learn at the end of her first grade year?

Ruby learns what segregation truly means. After hearing bits and pieces about racism all year long, she finally understands when a little boy refuses to play with her because of the color of her skin. While Ruby could have been angry, she wasn’t. Instead, she understood: The boy wouldn't play with her because his mother told him not to. Ruby knew that obeying her parents wouldn’t even be a question. She saw that the boy was simply doing as he was told.

What did Ruby mean when she said, “The principal couldn’t change what was in my head?”

The principal wanted to change the very good grades Mrs. Henry gave Ruby at the end of the year. But whether the principal lowered her grades or not, Ruby was learning. No one could take knowledge away from her, even if her grades were changed.

Students should read the “November 14, 1960” section of Through My Eyes by Ruby Bridges and the excerpts from Part Four, Chapter Four from John Steinbeck’s Travels With Charley: In Search of America that are included in Through My Eyes. After reading the excerpts, students will be able to compare and contrast Ruby’s description of going into the school with Steinbeck’s descriptions.

For students who need assistance with writing, have them complete a graphic organizer individually or as a class.

Students will complete two on-demand writing pieces. The first is a poem that utilizes the rhetorical device ekphrasis. The second is a persuasive writing piece. Students will spend approximately twenty minutes on each activity.

For students who require additional time and/or support, you may want to select one of these activities or spread the writing out over the course of more than one class period. 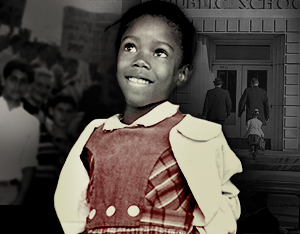 With slide shows, video, and a digital magazine, learn how Ruby Bridges desegregated a New Orleans school in 1960.

Through My Eyes
By
Ruby Bridges
Grade
3-7
Reading level
X
Paperback Book
$5.96
From the Teacher Store