Part I: Consider What It Means to Break the Law

Before you introduce students to Rosa Parks, have them consider the following question:

Are people ever justified in breaking the law?

Have students consider circumstances where they think it might be alright to break the law.

Step 2: Break students into groups and have them discuss why Rosa Parks was justified in breaking the law. Each group should write a brief paragraph explaining their reasons.

Step 3: Have students consider what Rosa Parks could have done instead of breaking the law. Would these actions have resulted in the same outcome?

Step 4: Ask students to think about what they would have done if they were Rosa Parks. Explain that each student will be writing an imagined account of the afternoon on that Montgomery bus, as well as the events that followed. Students should write their essays from the perspective of Rosa Park, the bus driver, or another passenger (black or white) who was on the bus that day.

Step 5: Have students return to their individual desks. Hand out the Drafting an Outline Worksheets. Help students complete their outlines if necessary.

Step 6: Provide time for students to shape their outline into a first-person essay. Their account should include what they (the persons whose personas they are adopting) felt as these historic events unfolded. Students should write a first draft and a revised draft.

Step 1: Hand out the Cause and Effect Graphic Organizer printable.

Step 2: In the box on the right, have students write in "Civil Rights Movement." Ask students to define the civil rights movement based on the following criteria:

Step 3: Have students use the information they learned in the profile of Rosa Parks to enter at least six causes that led up to the civil rights movement.

Step 4: Have students imagine what could have happened if...

Step 1: Have the class again consider the question you posed at the beginning of the lesson:

Are people ever justified in breaking the law?

Step 2: Ask students to discuss the ways Rosa Parks and other participants in the civil rights movement broke the law. Were these people justified? Why or why not? Have students use examples from the cause/effect worksheet to support their arguments.

Step 3: Drawing on the essays they wrote, have students consider how people on both sides of the movement felt about the civil rights leaders breaking the law.

Have students write a newspaper article (imagining it is 1955) covering the events of Rosa Parks' arrest and the bus boycott.

Read about the history of jazz. Have students consider these questions: 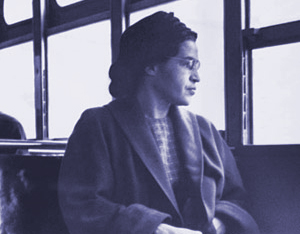 Rosa Parks: How I Fought for Civil Rights

In this online activity, students will read the heroic story of Rosa Parks, who played a pivotal role in the civil rights movement. 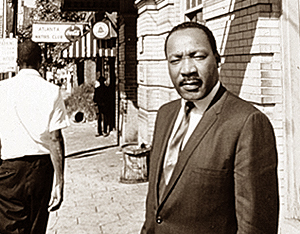 Students learn about the speech Martin Luther King Jr. gave in 1955 at the time of the Montgomery Bus boycott.

Cause and Effect Graphic Organizer

Use these lesson plans for teaching the Black History in America online activity. Plus, ideas for incorporating them into your classroom or computer lab lesson.