Bookmark Hoot: A Flashlight Readers Activity on the computers students will use.

Step 1: View with students some of the slides from the Hoot the Movie section in Hoot: A Flashlight Readers Activity. Discuss the characters in the picture, the setting, and the caption. Share the Plot Diagram printable with students and have them identify where in the rise and fall of the plot this scene takes place.

Step 2: Fill out an Idea Web printable as a class. In the center describe the scene briefly; map concepts to this scene by prompting students to answer questions such as:

Identify whether the concepts you map to the scene refer to the characters, setting, dialogue, or theme.

Step 3: Ask students to imagine a new story behind the picture — something that may have nothing to do with Hoot or the caption below the movie still. As a class, determine a new plot. For example, the scene in which Mullet Fingers and Roy explore some of Florida's undisturbed waterways could be a picture of two friends fishing on a lake...what happened before this scene? After the scene?

Step 4: Explain that students will now choose another still from the movie and outline a new story based on the picture. As a final project, they'll actually write a new short story. Have students start by brainstorming ideas based on the picture, which they'll record in their own Idea Web printables. They should include specific details about what you can see in the picture, as well as important facts that are related to the new story.
Points to include:

Step 5: Going back to the class Idea Web, demonstrate to students how to use their brainstorm ideas to start a story. You might start with a conversation between characters, describing the setting, or letting the reader in on a character's thoughts. Give several examples of how to begin. Then, give students time to write their own story.

Step 6: Have students peer edit each other's work using the class' brainstormed list as a guide for what should be included. Once they have given and received feedback, give students more time to write a final draft. Finished work can be displayed in the room under enlarged copies of the stills students chose. 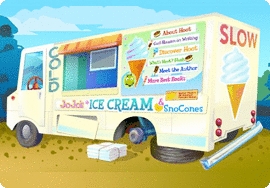 Students draw inspiration to discuss, research, and write about important issues from Carl Hiassen's book Hoot. They also pay special attention to plot elements and incoporate them into their own writing.

One Small Hop
By
Madelyn Rosenberg
Grade
3-7
Hardcover Book
$13.49
From the Teacher Store

The Beekeepers
By
Dana L. Church
Grade
3-7
Hardcover Book
$14.24
From the Teacher Store