No one knows for sure what the Niña, the Pinta, or the Santa Maria looked like. But experts do know that the Santa Maria, Columbus's flagship, was the largest of the three vessels. It was probably about 80 feet long and 23 feet wide, and it carried a crew of 40, including Columbus. The Niña, Columbus's favorite of the three vessels, held 24 sailors, and the Pinta held the remaining 26 men.

To give kids a sense of the size of the Santa Maria, and of how crowded it would have been, work as a class to measure out a distance 80 feet long and 23 feet wide on your school playground. Mark the area with chalk, tape, or rope, and then ask 40 kids to stand in this space. Remind the class that the deck of the ship was also used to carry food, beverages, the crew's personal belongings, and other supplies. Since there was no room on board ship for beds, the men had to sleep anywhere on deck that they could!

Time to Make a Timer!

How did crewmen aboard the Niña, the Pinta, or the Santa Maria know when it was time to do their chores? They depended on a half-hour sand glass, and the ship's boys who called out the time. “One glass is gone and now the second floweth,” the boy on duty would shout. After eight glasses, or four hours, a new boy would come on deck to call out the time. Invite students to make their own sand timers using two plastic soda bottles, salt or sand, masking tape, plastic wrap, and a pin or pen. Have students pour some salt into one of their two bottles, seal the mouth of that bottle by covering it with plastic wrap and attaching the wrap with tape. Then use the pin or pen to puncture a small hole into the plastic wrap. Next, students should firmly tape the mouth of the second bottle over the first one. Students can then turn the bottles over and see how much time it takes for all the salt to run from one bottle into the other. If you like, turn this activity into a “timely” contest by awarding a prize to the child whose sand timer comes closest to measuring exactly 30 seconds or another predetermined amount of time. 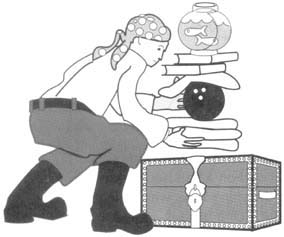 What Would You Take On Board?

Personal belongings on Columbus's ships were carried in chests that were about five palms long, three palms wide, and three palms high. (A palm was the measure of length from the thumb to the end of the little finger when the fingers are stretched out.) Have students find or make a box that is approximately this size. Then tell the class to imagine that they are packing as members of Columbus's crew. Ask students to list the items that they would have wanted to take on the voyage. Next, have students estimate whether their belongings would fit in one of these boxes. If not, students will have to cut their lists down even more. Finally, have students share — and compare — their lists with a classmate. What types of items did everyone pack?

Emphasize to students that many of the measurement tools that Columbus used — from the sand timer and compass to the quadrant and his method of dead reckoning — were imprecise, yet they still helped him to navigate the ocean. Assign a team of students to find out more about each of these tools and/or others. When they're ready, select a spokesperson from each team to explain to the class the tool's purpose, how Columbus used it, and how accurate it tended to be. The group should also be prepared to share the names of tools that are used today to serve the same, or a similar function, and to talk about whether the accuracy of these tools has improved.

Traditionally, Columbus Day is celebrated on October 12, the day that he and his crew supposedly reached land. But that's the date they reached on the old Julian calendar! If you adjust the date to suit the Gregorian calendar that we use today, Columbus actually landed in the Americas on October 21, 1492.

Picture Book of Christopher Columbus, A

Teach your students about Christopher Columbus and his historic journey with these articles, quizzes, printables, research ideas, and more.