Where Were the Warnings? 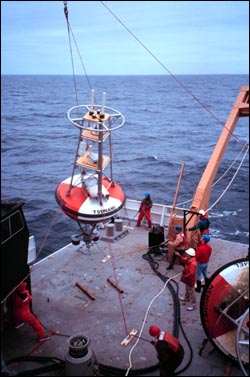 Talks about a worldwide tsunami warning system began 40 years ago, after Alaska was struck by giant waves. As a result, a system was designed that now links 26 Pacific Ocean nations. So why was there no warning in South Asia last month? More than 150,000 people have died so far in the one of the world's worst natural disasters.

"Clearly there wasn't a proper warning system in place for that part of the world," said U.S. President George W. Bush. "It makes sense for the world to come together to develop a warning system that will help all nations."

Of the 12 countries struck by December's tsunami, only Thailand had any kind of warning system in place.

"They (South Asian countries) would have known where the areas of danger are," said Conrad Lautenbacher, head of the National Oceanic and Atmospheric Administration. "You could have evacuated or moved people out of these areas. They could have walked out of the areas, quite frankly."

Money was the problem, say experts. Officials in several of the countries affected by the recent tsunamis have said that they could not afford to put a warning system in place. In the aftermath of the recent devastation, the creation of a warning system has become a priority for many nations.

India will spend more than $20 million to set up an alert system for the Indian Ocean. According to Kapil Sibal, minister of science and technology and ocean development, the warning system should be ready in two-and-a-half years.

More money will be necessary for countries like Indonesia, which needs to build communication links among small coastal communities. Many of these villages lack the technology necessary for a warning system to operate successfully.

"That's going to require a lot of work," said Phil McFadden, chief scientist at GeoScience Australia, which is working to design an Indian Ocean system. "But this amount of money is nothing compared to the cost of what has happened."

Check out the following Web sites for more information on tsunamis:

This site has information on tsunamis from recent data to historical tsunami events. You'll also find the answers to frequently asked questions about tsunamis.

Visit this site to learn how tsunamis are detected and reported. Check out the Frequently Asked Questions section for more information.

Tsunamis and Earthquakes at the U.S. Geological Survey

Visit this government site from the U.S. Geological Survey to learn more about how earthquakes generate tsunamis.