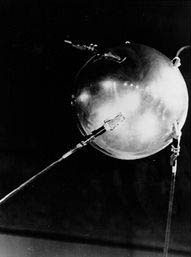 The Soviet Union launches the first artificial satellite. Called Sputnik, a combination of words meaning "fellow-traveler of Earth," it weighs about 184 pounds. Sputnik circles the globe beeping radio signals, demonstrating that the Soviets have rockets that could send warheads anywhere on Earth. This event triggers the space race between the United States and the Soviet Union. 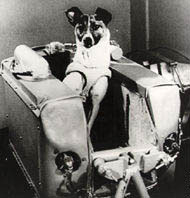 The Soviet Union launches a female dog into space on Sputnik II. Her name is Laika, which means "barker" in Russian. She lives for seven days, proving that animals (and presumably humans) can survive in space. There is no way to bring her back alive, so Laika is put to sleep. Sputnik II falls to Earth in April of the next year. 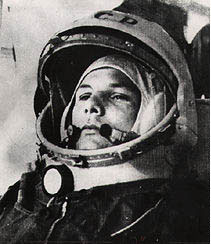 Riding on the Soviet Vostok 1, Yuri Gagarin becomes the first man in space. In case spaceflight caused Gagarin to behave strangely, the craft's controls were locked. There was a key onboard in a sealed envelope in case of emergency. Vostok 1 shook wildly during entry, but Gagarin did not use the key. Once he was low enough, he ejected and used a parachute. 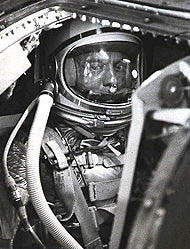 The United States sends astronaut Alan Shepard on a 15-minute, 28-second sub-orbital flight onboard Freedom 7. Three weeks later, on May 25, 1961, President John F. Kennedy vows to send men to the moon and back before the end of the decade.

John Glenn circles Earth three times in 4 hours and 56 minutes. In 1998, at age seventy-seven, John Glenn becomes the oldest person to fly in space, as part of the STS-95 space shuttle crew. 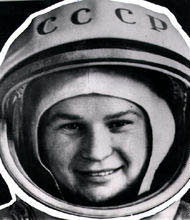 The Soviets launch Valentina Tereshkova on Vostok 6. She spends three days alone in space. Her spacecraft comes within three miles of Valeri Bykovsky in Vostok 5. This is first time two spacecraft pass this close together while in orbit.

Cosmonaut Alexei Leonov takes the first space walk, a ten-minute tethered excursion outside Voshkod 2. On June 3, 1965, Edward White II is the first American to walk in space on Gemini 4. He stays out 22 minutes.

Find out more about the past, present, and future of space exploration with Challenging the Space Frontier.
--
--
--
--
--
--
Related Subjects
Historic Figures Space Travel World History