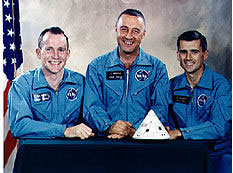 During a test on the launchpad, a fire kills Apollo 1 astronauts Virgil "Gus" Grissom, Ed White, and Roger Chaffee. Then, on April 24, 1967, the Soviet craft Soyuz 2 crashes on re-entry, killing Vladimir Komarov — the first cosmonaut to die during flight. 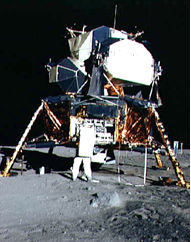 During the flight of Apollo 11, Neil Armstrong becomes the first man to walk on the moon. Buzz Aldrin is the second. Armstrong says, "That's one small step for man, one giant leap for mankind." Millions of people watch live on television. 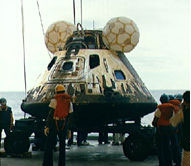 The Apollo 13 capsule after splashdown (NASA) 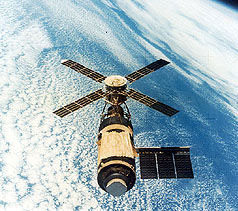 The first American space station, Skylab, is damaged during launch. The first of three crews arrive 11 days later for a 28-day stay. They make in-orbit repairs and set records for time spent in space.

American and Soviet spacecraft dock together in space in a show of peaceful cooperation during the Apollo-Soyuz mission.

Viking 1, an unmanned scientific probe controlled by scientists on Earth, transmits the first pictures from the surface of Mars. Viking 2 arrived in September 1976.

Find more about the past, present, and future of space explorations with Challenging the Space Frontier.
--
--
--
--
--
--
Related Subjects
Space Travel World History