A Timeline of Ronald Reagan's Life 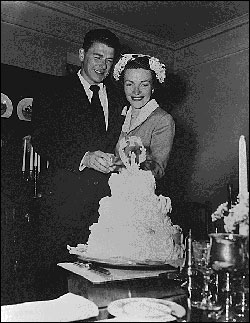 The nation's 40th President, Ronald Wilson Reagan, died Saturday, June 5, 2004 at the age of 93. The onetime liberal Democrat changed parties and lead government through a conservative revolution in the 1980s. He was considered to be the most popular President since Franklin Delano Roosevelt. Here are some of the highlights of his life.

1932: Graduates from Eureka College in Illinois with a degree in economics and sociology. 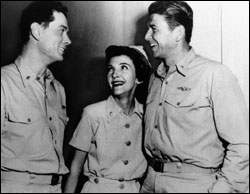 1954: Becomes host of TV's General Electric Theater and a spokesman for the company.

1957: Stars with Nancy in Hellcats of the Navy.

1960: Campaigns as Democrat for GOP presidential bid of Richard Nixon, who lost

1962: Reagan registers as a Republican.

1964: He is made a national political figure when he makes his "A Time for Choosing" speech supporting GOP presidential candidate Barry Goldwater.

1965: Publishes autobiography, Where's the Rest of Me? 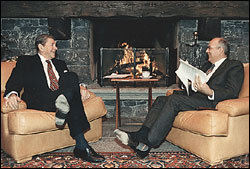 1980: Wins Republican nomination for President and in November, he is elected the 40th President of the United States.

October 1983: Sent U.S. Marines to Lebanon as part of a peacekeeping force. U.S. Marine Corps barracks were bombed in Lebanon, 241 people were killed. In early 1984, Reagan withdrew the surviving marines.

November 1985: Meets with Soviet President Mikhail Gorbachev for first time at the first arms summit in Geneva. Just two years later, the two leaders sign the first treaty ever to reduce the number of nuclear weapons.

January 1986: Challenger explodes. "The crew of the space shuttle Challenger honored us by the manner in which they lived their lives. We will never forget them, nor the last time we saw them, this morning, as they prepared for the journey and waved goodbye and 'slipped the surly bonds of earth'to 'touch the face of God,'" Reagan said after the explosion. 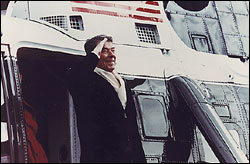 President Reagan's last day as President. He boards the helicopter at the U.S. Capitol on January 20, 1989.
(Photo: Ronald Reagan Library/NARA)

May 1987: Congressional hearings begin on Iran-Contra affair. The hearings revealed that presidential aides had illegally sold weapons to Iran, giving the money to Nicaraguan rebels. Iran was an enemy of the United States.

June 1987: Visits Berlin and urges Soviets to take down the wall that divides the west Berlin from Communist East Berlin. The wall came down in November 1989.

November 1994: Announces that he has Alzheimer's disease