Use this guide to create narrative to go along with the "Ruby Bridges and the Civil Rights Movement Slide Show" that is part of the "Ruby Bridges: A Simple Act of Courage" set of activities for students.

Tips for Teaching With the Slide Show

This teaching guide provides in-depth historical background to accompany the slide show about Ruby Bridges, her role in desegregating public schools in New Orleans in 1960, and her place in the broader civil rights movement.

In the slide show, you’ll meet key players such as Ruby, her teacher Barbara Henry, the Little Rock Nine, Dr. Martin Luther King Jr. and Rosa Parks; you’ll also encounter pivotal scenes from segregated America in the 1950s and 1960s, including peaceful protests and the signing of the Civil Rights Act.

You can use the teaching guide in several ways. Use it as reference material before teaching one of the Common Core-aligned lesson plans. The teaching guide can also provide a narrative as you view the slideshow with your students. And you can review the vocabulary words embedded in the text, with definitions provided in the Vocabulary guide, to boost your students’ knowledge of the time period.

Narrative and Historical Background for Each Slide

On November 14, 1960, six-year-old Ruby Bridges started first grade at William Frantz Public School in New Orleans. This seemingly ordinary act was, in fact, historic: Ruby and three other girls were the first African American students to integrate all-white schools in New Orleans. Ruby was the only African American student who went to William Frantz Public School.

Ruby’s world was quite different from the world we live in today. In the South, African American students and white students went to separate schools because of segregation policies.

During the 1950s and 1960s, the civil rights movement was calling attention to the problem of segregation and the broader issues of racism and inequality that, under the law, resulted in African Americans being denied basic rights.

Ruby stepped into history and became an icon of the civil rights movement by bravely integrating her school.

Slide 2: What Was Segregation?

Separating people based on the color of their skin is called segregation. Segregation existed in the United States for decades after slavery ended. Racist laws and policies treated African Americans as second-class citizens and separated African Americans and whites. These types of laws became known as Jim Crow laws. Jim Crow laws existed in states south of and including Virginia. The term Jim Crow was a rude, uncomplimentary way of referring to black people. 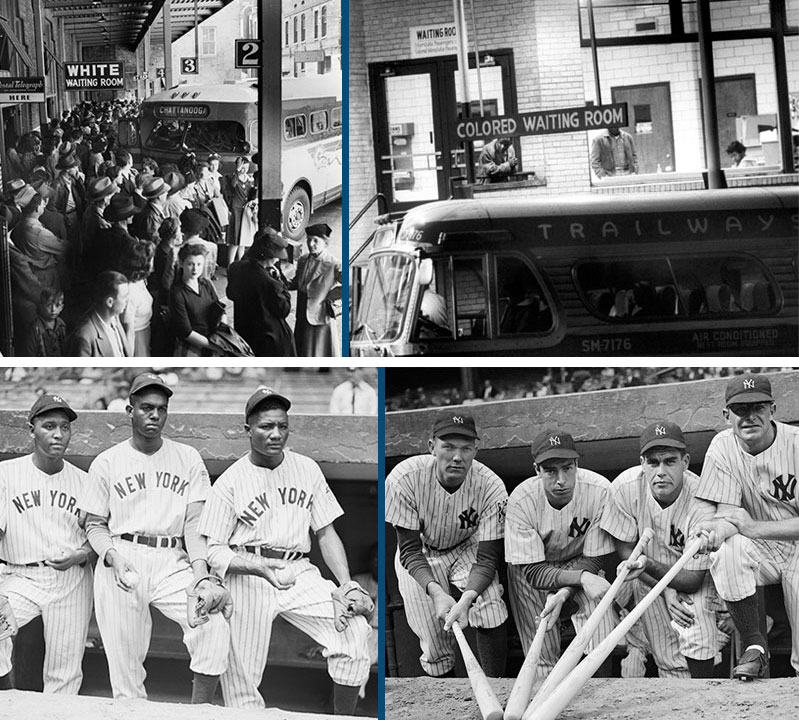 Slides 3, 4 and 5: Life During Segregation

Segregation affected people’s daily lives. For example, African Americans and whites used different water fountains and bathrooms. They had separate waiting rooms and seating sections on public transportation, such as buses. Baseball leagues were either all African American or all white. The effect of segregation was to make it seem as though African Americans were inferior to other people.

The Jim Crow laws had their legal foundation in the Plessy v. Ferguson ruling of the U.S. Supreme Court in 1896. The ruling said that dividing citizens by race was constitutional if the separate facilities were considered equal. The ruling legalized segregation and introduced the legal idea of “separate but equal.”

Slide 7: Brown v. Board of Education

In 1954, the Supreme Court said, in the case of Brown v. Board of Education, that separating students by race created educational facilities that were unequal. Therefore, segregation laws and policies violated the Fourteenth Amendment, which prohibits states from denying citizens their civil liberties and equal protection under the law. The ruling had the effect of desegregating public schools in the United States.

Thurgood Marshall (center in photo) was the attorney who successfully argued the landmark case against segregation, along with George E.C. Hayes (left) and James Nabrit, Jr. (right). Marshall later became the first African American justice of the Supreme Court.

Slides 8 and 9: States Are Forced to Integrate

In parts of the South, state governments refused to enforce the federal ruling. In Virginia, some schools even closed to avoid integrating.

In 1957 in Arkansas, nine African American students integrated the all-white Central High School in Little Rock. Anti-integration protestors surrounded the school, and the governor sent the Arkansas state militia to blockade the school, refusing entry to the nine students.

President Eisenhower ordered federal troops to protect Elizabeth Eckford (shown in slide 8), Melba Patillo, and the seven other students who were able to integrate the school.

The movement reached its peak in the 1950s and 1960s and was characterized by civil disobedience and nonviolent protests, such as boycotts, sit-ins, and marches. Martin Luther King Jr., Malcolm X, Rosa Parks, and other leaders and activists — as well as thousands of ordinary people — took part in the protests.

Slide 11: Resistance and the Mother of the Freedom Movement

As a result of her nonviolent resistance to segregation laws in Alabama, Rosa Parks became a civil rights activist and was known as the Mother of the Freedom Movement.

On December 1, 1955, Parks was riding a Montgomery bus home from work. She was seated in the African American section of the segregated bus. Her seat was in the row closest to the white section of seating, which was full. When several more white passengers boarded the bus, the bus driver ordered Parks and three other African American passengers to move back. Parks refused, and the bus driver had her arrested for violating segregation laws.

The arrest of Rosa Parks marked the beginning of the Montgomery bus boycott, a 381-day mass protest against the segregated bus system in Montgomery, Ala. On December 5, African American residents stopped using the Montgomery public bus system, causing it to lose 75 percent of its riders. Impressed by this success, local civil rights leaders encouraged the boycott. They also filed a federal lawsuit against bus segregation.

On June 5, 1956, a federal district court decided that segregated bus seating was unconstitutional; the Supreme Court agreed in November of 1956, and buses were legally desegregated on December 20, 1956.

Other protests focused on lunch counters and restaurants in the South, which had refused for years to serve African American customers. Protestors organized sit-ins, during which civil rights activists, both African American and white, gathered in groups to sit at lunch counters for hours. They were denied service, but took up seats that could have been filled by paying customers.

In September 1959, students held a sit-in at Grant’s Department Store in Miami (shown here) that lasted for weeks. The restaurant decided to close rather than serve African Americans. Activists throughout the South took note of the nonviolent action in Miami and began holding their own sit-ins, including one at the Woolworth lunch counter in Greensboro, NC, in 1960.

The civil rights movement was growing stronger, and laws were changing, but by the late 1950s many schools in the South still had not integrated. Many white people did not want integration, and the state governments were not enforcing the federal rule. Finally, a federal court ruled that New Orleans schools would have to integrate by 1960.

In kindergarten, Ruby had attended an all African American school. She had many friends, and an African American teacher. She loved school. Then Ruby passed an entrance exam that the anti-integration school board designed so that African American children would fail, with the aim of keeping them out of the all-white schools.

After the integration ruling and Ruby passed the entrance exam, Ruby’s parents had a choice of where to send her to school. The NAACP encouraged them to send Ruby to the all-white school. They said it would be a better school, and that she would be helping all children by integrating schools. Ruby’s father wasn’t sure his daughter should go. He wanted to protect Ruby from angry segregationists. Ruby’s mother, Lucille, however, wanted her daughter to have better opportunities. Eventually, Ruby’s parents decided she would go to William Frantz Elementary.

In November 1960, Ruby and six other students integrated New Orleans elementary schools. Ruby was the only African American student at William Frantz Elementary.

People in the city of New Orleans were angry that schools were being forced to integrate. And Judge J. Skelly Wright, the federal judge who ordered the schools to integrate, was worried about the students’ safety. He asked the federal government for U.S. marshals to protect the students. On her first day of school -- and for months after -- the marshals escorted Ruby into William Frantz Elementary.

Anti-integration protestors lined up outside of Ruby's school. The police kept them behind barricades. In her book Through My Eyes, Ruby remembers that they were very loud, like the city's residents were during Mardi Gras. The protests continued into the spring. Marshals escorted Ruby to school throughout that time.

The white protestors also wanted to make sure white families boycotted the school. On Ruby’s first day, white parents came to pull their children out of the integrated school.

Ruby’s teacher, Barbara Henry, was young, white, and from Boston. Ruby had never spent much time with a white person before. Ruby’s first grade experience was unique. She was in a classroom by herself, because white parents didn’t want their children in class with an African American student. Ruby spent all her time with Mrs. Henry. They became very close.

Strong anti-integration protests and rioting in New Orleans died down by the end of the school year. And in second grade, Ruby was in a classroom with other students, including white children. Ruby graduated from William Frantz Elementary School and, eventually, high school in New Orleans. Today, she gives speeches about the experiences she had during the civil rights movement.

Photo Credit: From the collection of Barbara Henry

Desegregation continued in the South, and the civil rights movement carried on in the early 1960s. Martin Luther King Jr., the most famous civil rights leader, advocated civil disobedience and nonviolent protest to fight racism and discrimination. His most famous speech about racial equality, “I Have a Dream,” was delivered in Washington, D.C., in 1963.

The law was intended to end to racial discrimination under the law by guaranteeing equal voting rights for minorities; prohibiting segregation and discrimination in public places; desegregating public schools and other public facilities; demanding Equal Employment Opportunities for all races and sexes and outlawing discrimination in the workplace; and giving the Attorney General the right to intervene in certain state court cases concerning the 14th Amendment.

In 1965, President Johnson signed the Voting Rights Act, which protected the rights of minorities. These important laws continue to protect equality today.

Navigating the slide show. Roll over any part of the image area with your cursor; forward and back arrows will appear to the right and left of the image. Click on the arrows to progress through the slideshow. You can also click the thumbnail images in the bar at the bottom of the slide show to jump from image to image.

In This Teaching Guide