Relive a Boy's Journey to America

Learn about Seymour Rechtzeit, a Jewish immigrant from Poland who became a famous child star, through his firsthand account of coming to America through Ellis Island.

Seymour Rechtzeit was 8 years old in 1920, when he left his home in Poland and journeyed to America. Why do you think he came, and what happened when he arrived? This is Seymour's story, in his own words.

My name is Seymour Rechtzeit and I was born in Lódz, Poland, in 1912. My family is Jewish, and I first began singing in our synagogue. By the time I was 4, I was called a wunderkind, or “wonder child” in English. Soon I was singing in concerts all over Poland.

My family decided that I should come to America, where there would be more opportunities for me. The Great War (which you know as World War I) had just ended, and it was a bad time in Europe. I had an uncle living in America, and he sent two tickets for my father and me to sail across the Atlantic Ocean. The rest of my family stayed in Poland. The plan was that my father and I would earn enough money to eventually bring them to America, too.

In Danzig, a city on the shore of the Baltic Sea now known as Gdansk, we boarded a ship called The Lapland. It was 1920, and I was on my way to America.

Riding on a big boat across the Atlantic Ocean may sound like fun, but it wasn't. The two-week trip was miserable! Our beds were in steerage, way down in the bottom of the boat. It was lined with bunks, one on top of the other. It was uncomfortable and crowded. I went up on deck all the time, just to have space to move around.

We hit many bad storms at sea. It rained hard, and I was often wet and shivering. By the time we sailed into New York Harbor, past the Statue of Liberty, I had a very bad cold. Still, I was up on deck in my good white suit, cheering along with everyone else at the awesome sight of the statue.

Back then, immigrants had to pass a medical examination before they were allowed to enter the country. Many people were sent back to where they came from. I was 8 years old and I was ill. I didn't know what was going to happen to me in America.

At Ellis Island, my father, who was not sick, stood in long lines as part of the entry process. Officials asked him lots of questions about where he came from, what he did for a living back in Poland, and what his plans were in America. All immigrants had to answer these questions. Only then could the newcomers leave Ellis Island and take a ferry to New York — and finally set foot in America.

When the doctor examined me, he discovered I had a cold. He said I could not go with my father, though I cried and begged. I was terrified to be all alone in this strange place.

I stayed on Ellis Island for a few days, until I was feeling better. I had no toys with me. I didn't know of such things. But there were other sick boys to keep me company. Some of them spoke Yiddish, my language. We ate in a huge dining room. The food was different — it was American style. But it was good, especially the milk.

There was a long gate that led to the boats that took people off the island, across New York Harbor, to the city. Every day, we boys would walk to the gate and look out over the water. We wanted to see America. It was like being in a jail. We felt sad and wondered if we would ever get through that gate and onto a boat for that final journey to our new country, the United States.

My cold soon went away, and then the officials told me that my father and uncle were coming to get me.

As I stepped off the boat from Ellis Island, I felt a rush of joy. All around me were hundreds of families greeting their relatives, welcoming them to America.

That was the beginning of my new life in New York. Right away, I started singing in concerts and earning money to help bring the rest of my family to America. I sang in school, too. I sang "My Country 'Tis of Thee" and "The Star-Spangled Banner." I learned quickly. 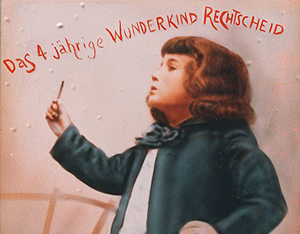 I became a child star of vaudeville. That's a kind of entertainment in which actors sing and tell stories. I was very popular because I was a kid. I traveled from place to place to entertain.

Within a few years, I had made enough money to bring my mother, brothers, and sisters to America. But I faced a new problem: It was 1924, and by then, not as many immigrants were being allowed into America. My family could not get permission to come. They were in Poland, and my father and I were in America. How would we be a family again?

Singing for the President

My voice was the ticket that would bring my family to America. A congressman who had heard me sing arranged for me to come to Washington, D.C., and perform for leaders at the U.S. Capitol.

The politicians liked me and wanted to help. They arranged an invitation to sing for President Calvin Coolidge in the White House! That did it. After I sang, I met the President. He shook my hand and told me I sang well. He said he'd help get my mother, brothers, and sisters to America. We would be a family again!

Many wonderful things happened to me in America. I kept singing as a young man and became a star of Yiddish theater. I appeared onstage and made many records. I met my wife, Miriam Kressyn, who was also a singer and an immigrant. Her family came through Ellis Island, too. We were married for 43 years.

I went back to Europe, traveling as an actor, but I never returned to Poland. I have always been very happy to be in this wonderful country.

Students learn about the effects of immigration on American history and culture with a variety of resources for each grade level.