Mystery Animal: Which Cat Is That? 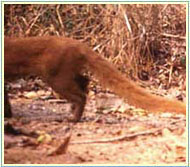 This photograph was taken with one of our camera traps. Camera traps are not really 'traps,' but cameras encased in a weatherproof box that take pictures of animals as they go by. The cameras are placed along trails and riverbeds, and are attached to trees at 50 cm height. The camera shutter is activated by a motion detector.

Sometimes, the camera may only catch part of an animal. The challenge is then identifying the animal. We look carefully at clues like the coloration of an animal, its relative size, its tail, and any other distinguishing features. Look at the mystery photo and use the clues and guiding questions below to help you identify the animal that we 'caught' in one of our camera traps.

If you have narrowed your selection to a jaguarundi, you are right! Jaguarundis have several coat colorations including a chestnut-brown color. They are about the size of a large house cat, and have a long tail. They are also active during the day, as is confirmed by the camera-trap photo.

The photograph from a camera trap not only tells us what animals are present in an area, but also shows the time of day different animals are active and if an animal is mostly nocturnal (active at night) or mostly diurnal (active during the day). The camera trap caught this ocelot at night.

To date, the camera traps have recorded many different predators: ocelots, pumas, coatimundis, coyotes, raccoons, and bobcats, in addition to prey species such as Virginia possum and white-tailed deer. The ocelot is the cat species most frequently captured on camera. The bobcat we documented with a camera trap is especially important since bobcats were not thought to exist this far south. Chamela is now one of the few places in Mexico with six species of wild cats.