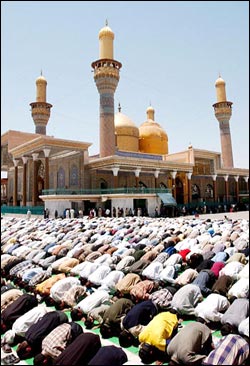 Shiites pray at the Moussa al Kadhim shrine in the Kadhimiya neighborhood of Baghdad, Iraq on Friday, June 11, 2004. The shrine is the holiest Shiite site in Baghdad.
(Photo: Stefan Zaklin/EPA/AP Wide World)

Nearly 80 percent of Iraqis are Arabs. This population is split between the two great branches of Islam—Sunni Islam and Shi'i Islam. (Most of the world's Muslims are Sunnis.) Shi'i Islam is dominant in Iran and in southern Iraq. While Shi'ites in general make up nearly two-thirds of Iraqi Muslims, in the past they have been less influential than the Sunnis, both politically and economically.

The Kurds, who live in the mountains of the northeast, are Iraq's largest minority group. Along with additional communities in Turkey and Iran, the Kurds have long sought their own independent state.

Arabic is the national language of Iraq. The Kurds, who are non-Arabs, speak Kurdish. In some places, Assyrian and Armenian are also spoken.

Almost all Iraqis are Muslims, followers of the religion of Islam. About 4 percent of the population is Christian. There is also a small sect known as Yazidis whose religion combines Islam and earlier forms of worship. Thousands of Iraqi Jews immigrated to Israel after that country was founded in 1948.

Traditionally, most Iraqis earned their livelihood by farming or raising livestock. Farmers lived in villages, usually in houses made of sun-dried mud brick (much like the adobe used for buildings in the southwestern United States). Most produced only enough to meet their own families' needs. Wheat and other cereal grains, fruits and vegetables, and milk made up the typical diet. Meat, usually mutton (sheep) or lamb, was reserved for special occasions.

Although farming is still the single most important occupation, less than one-third of Iraq's labor force is now engaged in farmwork. Large numbers of country people have moved to the cities, where more than two-thirds of the population now lives.

Reviewed by Arthur Campbell Turner
Coauthor, Power and Ideology in the Middle East