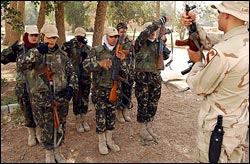 Female members of the Iraqi Civil Defense Corp learn proper drill techniques from a member of the U.S. Army at the Camp Bonzai Forward Operating Base in Baghdad on April 28, 2004.
(Photo: © U.S. Air Force photo by Staff Sgt. Ricky A. Bloom)

July 2004—Six months. That's all the time Fred Smith and his colleagues had to set up a Ministry of Defense in Iraq. During that time, they had to find the right people, hire them, and train them.

"The main obstacle was the fact that we were starting from scratch, so we were designing a new Ministry of Defense that had not existed before," Smith, senior adviser to the Ministry of Defense, told Scholastic News Online. "The people in Iraq had never done this before—or at least not in the last 40 or 50 years—so there were not many people who had any experience managing and running a Ministry of Defense."

"If you leave the military to allow it to lead itself, it becomes detached from the government and the will of the people," Smith said.

Smith and others started establishing the ministry around January 1, 2004, and worked until the transfer of power to the Iraqis at the end of last month. According to Smith, the ministry is still developing. When it's fully created in the next six months, about 1,500 people will be working for it. The top salary will be about $30,000 a year, which is considered a good salary in Iraq.

Another major difference with the new ministry is the fact that women are working for it. Several women are in top positions at the ministry, which is something new for Iraqis.

An Opportunity of a Lifetime

When Smith first found out he was going to Iraq, he wasn't scared. He had been there before for a couple of weeks and knew what the country was like.

"I knew when I left I'd be leaving my family for six months or longer, that I would miss the holidays, Thanksgiving and Christmas, and birthdays and things like that. And I knew that it was going to be hard work," Smith said. "Yes, there is a danger element, but I thought that the mission and what we were trying to accomplish was important enough to take those risks."

And Smith succeeded in his mission. He helped set up the new ministry, worked with Iraqis, and gave Iraqis an opportunity that they never had before.

"Many Iraqis expressed their gratitude to me because they never imagined that they would be in such a position," Smith said. "So I think the thing that I'm most proud of is the fact that we made it happen and were able to turn it over to the Iraqi people, and they are now responsible for it."

Click here to read more about what Fred Smith had to say.