This article is excerpted from 25 Quick Formative Assessments for a Differentiated Classroom by Judith Dodge.
Four More! is an assessment tool for closure that integrates collaboration, movement, and individual accountability. Students who struggle to stay seated all day long will welcome this movement activity.

The strategy begins with students working on their own. They then move around the classroom for a brief period of interaction and information gathering with classmates. The movement part of the activity usually takes no longer than three or four minutes, but it is just enough time to reenergize students and allow them to refocus their attention at the end of a lesson. Then, students head back to their seats where they individually elaborate upon what they've recorded, adding details to the main ideas they have gathered from their peers.

This animated learner enjoys the interaction that is encouraged as part of the Four More! activity. 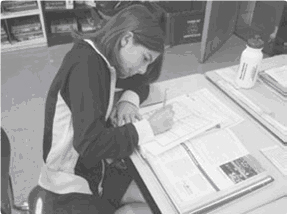 The second part of the Four More! activity invites individual reflection on what they have learned while engaging with their peers.

Applications
Use this strategy to review for a unit test or as a prewriting activity for an upcoming essay. 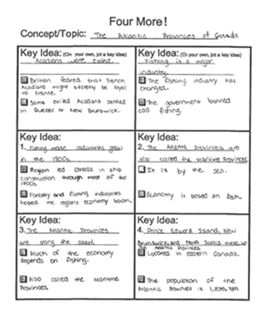 This Four More! summarizer was used after students were assigned a textbook reading on the Atlantic Provinces of Canada. After jotting down two key ideas of their own, students collaborated with peers to find Four More!, and returned to their seats to elaborate further on their own.

Educator and author Judith Dodge provides a variety of techniques for incorporating formative assessments into classroom practice and describes how this can assist in differentiating instruction.