Farewell to a President

The nation bade farewell to President Ronald Wilson Reagan in June 2004. Dignitaries from around the nation and the world attended funeral services at the National Cathedral in Washington, D.C. Millions watched as the ceremonies were carried live on TV. He was 93 years old.

The sunny and optimistic Reagan served as President from 1981 until 1989. He died after a 10-year struggle with Alzheimer's disease, which slowly erases a person's memory. When he learned that he had the disease, he wrote a letter to the nation, saying that he would begin "the journey that will lead me into the sunset of my life." Reagan lived longer than any U.S. President.

Reagan was known mainly for his economic and foreign policies. He believed that government should be small and stay out of the lives of Americans. He cut taxes, arguing that if people paid less money in taxes, they would have more money to spend, which would help the entire country. 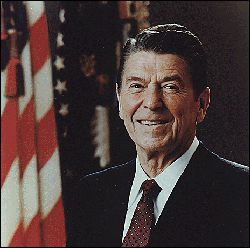 President Reagan led the nation during the end of the Cold War, a period of tension and mistrust between the United States and the former Soviet Union. He fiercely opposed the Soviet Union's Communist government, under which people could own nothing for themselves.

In 1989, the Soviet Union collapsed into several countries. Other Communist governments also crumbled, such as the one in East Germany. The Berlin Wall, which separated Democratic West Germany from Communist East Germany, was taken down, providing a symbol to the world of the fall of Communism. Reagan met with the new Russian leader, Mikhail Gorbachev. The two men patched up relations between their countries for the first time in many decades.

Reagan was a very popular President, winning both presidential elections easily. Before becoming President, he was Governor of California, and before that, he was a Hollywood actor. Perhaps his training as an actor helped him develop his warm and smooth speaking style, which many Americans liked.