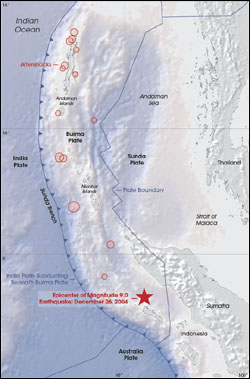 Shifting plates resulted in the Indonesian earthquake on December 26. Here, a red star marks the epicenter of the quake that recently changed Earth's shape.
(Photo: USGS)

January 11—The Earth's shape was slightly changed by the December 26 tsunami in South Asia. Because of those changes, a single day is a little shorter, and the North Pole has moved by about an inch.

All earthquakes have some effect on Earth's rotation, say two scientists from NASA. Dr. Benjamin Fong Chao of NASA's Goddard Space Flight Center and Dr. Richard Gross of NASA's Jet Propulsion Laboratory reported that these effects are usually not noticeable.

The massive quake and resulting tsunami in the Indian Ocean was not a typical quake, however. Reaching a nine on the new "moment" (similar to Richter) scale, this devastating earthquake was the fourth largest quake in 100 years.

In their study of the earthquake, Chao and Gross discovered that the location of the North Pole moved about 2.5 centimeters (or 1 inch) toward Guam in the Pacific Ocean.

As for the planet's shape, Earth is usually flatter on the top and bulges out near the equator. The South Asia quake caused Earth's shape to become more round.

Since the earthquake, the planet has been spinning on its axis just a little bit faster. This has shortened the 24-hour day by 2.8 microseconds (1 millionth of a second). The change in rotation is related to the change in Earth's shape. For example, when a spinning skater pulls arms closer to the body, he or she will turn faster. So, when Earth's shape changed, the speed of Earth's turning changed.