In 2004, President George W. Bush signed four executive orders, the first steps in meeting the recommendations of the 9/11 Commission Report. 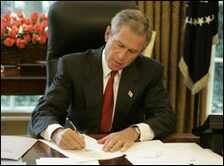 Friday, August 27, 2004 —Four executive orders issued today by President George W. Bush could be the first steps in meeting the recommendations of the 9/11 Commission Report. In an election year, however, the effectiveness of those steps has become the center of a heated argument.

The Bush Administration says the President has gone as far as he can under the law. Congress will need to act to finish the job. Critics of the executive orders say Bush did not go far enough soon enough. They also accuse him of acting in his own best interests rather than the nation's.

"If George W. Bush were serious about intelligence reform, he'd stop taking half-measures and wholeheartedly endorse the 9/11 Commission recommendations and work for their immediate passage by Congress," said Rand Beers, the national security adviser for the John Kerry campaign.

A senior White House official praised the President's actions, saying he went as far as he could without congressional action.

"These executive orders and presidential directives make good on the President's commitment to the 9/11 Commission Report," said a senior White House official in a conference call with reporters. "This will push intelligence reform and strain the limits of his executive power. It will strengthen the foundation we can build on with Congress. This is a down payment on the President s enduring commitment."

The first of the four executive orders expands the powers of the director of the Central Intelligence Agency (CIA). The 9/11 Commission has recommended that a national intelligence director be appointed to oversee the nation's 15 intelligence agencies. The new antiterror director should have complete control of the agencies' budgets, which total $40 billion a year.

"[Bush] gave the director of central intelligence right now every power he was capable of giving him, within the limits of his executive authority," the senior White House official said. "By law, he can't go further than that right now, and that's why we want to work with Congress."

Currently, the CIA is headed by acting director John McLaughlin. He replaced George Tenet, who stepped down in July. Bush has nominated Representative Porter Goss, a Republican from Florida, to the position. Goss, who was the former House intelligence chief, will face Senate confirmation hearings this month.

The second order calls for the creation of a counterterrorism center. The center, which would be run by a presidential appointee, would collect information on suspected terrorists. It would also coordinate the different agencies involved in gathering and acting on intelligence information.

The intelligence agencies must share information with one another, the President demands in his third executive order.

The fourth order creates an appointed board to investigate charges of civil rights violations by intelligence agencies. The board would recommend changes in operating procedures to the President in an effort to safeguard citizens' civil liberties.

"Expanding the powers of the existing director of central intelligence is a far cry from creating a true national intelligence director with real control over personnel and budgets," said vice-presidential candidate Edwards.

Leaders of a congressional committee appointed to respond to the 9/11 Commission Report welcomed the executive orders. Senators Susan Collins, a Republican from Maine, and Joseph Lieberman, a Democrat from Connecticut, issued a joint statement about the orders.

"Executive orders are only steps and ultimately will not be able to substitute for the legislation we hope to move in a bipartisan fashion through our committee in September," the statement read.