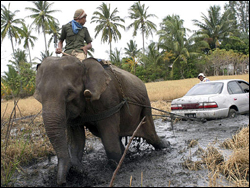 An elephant contributes to the relief effort, pulling a vehicle in a destroyed village near Banda Aceh, Indonesia.
(Photo: Nani Afrida/AP Wide World/EPA)

When the sound of trumpeting elephants filled the air at the Khao Lak beach resort in Thailand, their trainer knew something was wrong.

"I was surprised because the elephants had never cried before," said mahout (or elephant-driver) Dang Salangam.

Salangam and the other mahouts tried to calm the elephants, but the animals continued their restless behavior. Their cries, the mahouts soon discovered, were a warning. At least an hour before a deadly tsunami hit, animals throughout Southeast Asia sensed the approaching danger.

Once the waves came into sight, the elephants at Khoa Lak broke free of their chains and lifted about a dozen tourists onto their backs with their trunks. They transported the tourists to higher ground and to safety.

The number of animals killed in the December 26 floods remains surprisingly low because they somehow sensed the danger early. How could these animals have known to flee to higher ground?

"I think animals can sense disaster," said H.D. Ratnayake, deputy director of Sri Lanka's Wildlife Department. "They have a sixth sense. They know when things are happening."

Many cultures believe that animals have unique mystical powers. According to scientists, however, that power is merely a heightened sense of hearing.

"In anything to do with vibrations, seismic shocks, or sound waves, animals have capabilities which we do not," says Herve Fritz, a researcher in animal behavior at France's National Centre for Scientific Research (CNRS).

Elephants use infrasound communication. They can sense low frequency noise that human ears are unable to hear.

"[Elephants] can pick up these sounds at very great distances, from dozens of kilometers away," Fritz said.

Can animals like elephants possibly be used as an early warning system for approaching disasters? Scientists are working on it.

Meanwhile, the elephants in Thailand have returned to the disaster area to help in the cleanup.