The U.S. presidency is one tough assignment—so tough, some wonder why anyone would want the job. But every four years, presidential hopefuls line up for a chance to call 1600 Pennsylvania Avenue home. In the end, only one person wins the trust—and the votes—of the American people.

Since 1789, the U.S. has elected 43 Presidents, including George W. Bush. Only three former leaders are alive today. Each of their presidencies helped to shape the course of American history.

After serving as Vice President under Richard Nixon, Gerald Ford rose to power in the wake of one of the most notorious political scandals in U.S. history. He succeeded Nixon, who resigned in disgrace after investigations revealed that Republican officials had broken into the offices of the Democratic National Committee during the 1972 election.

On August 9, 1974, Ford took the oath of office, vowing to restore trust in the presidency. A fiscal conservative, he worked vigorously to institute policies that would free the U.S. from the grip of inflation, energy shortages, and a rocky economy. He also vetoed several bills that would have increased the federal budget deficit.

Overseas, Ford worked with Soviet leader Leonid Brezhnev to establish new restrictions on nuclear weapons. In the interest of avoiding a new war in the Middle East, he provided aid to both Israel and Egypt and convinced both countries to accept a truce agreement.

Before he became Commander in Chief, Ford represented the state of Michigan in Congress for 25 years. In college, he majored in political science and starred on the University of Michigan football team. After graduating, he earned a law degree from Yale University and served as lieutenant commander in the Navy during World War II.

Although Ford won the Republican nomination in 1976, his re-election hopes were dashed when he was defeated by his Democratic challenger, Jimmy Carter, the Governor of Georgia. 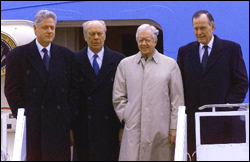 After turning in an impressive victory against Gerald Ford, Jimmy Carter inherited a country battered by inflation and unemployment. Nevertheless, he brought an ambitious domestic agenda to the White House.

During his four years in office, Carter established a national energy policy, created the Department of Education, decreased the federal budget, strengthened the social security system, and created nearly eight million new jobs. Despite Carter's successes, the country fell into a recession on his watch.

On the international front, Carter helped forge a framework for peace between Egypt and Israel through the Camp David Accords of 1978. He established diplomatic relations with the People's Republic of China and finalized the negotiation of a critical nuclear limitation treaty with the Soviet Union (now Russia).

The final months of Carter's administration were consumed by the kidnapping of 52 U.S. embassy staff members in Iran. Although the Americans were eventually released on January 20, 1981, the hostage crisis, combined with continued inflation at home, proved fatal for Carter's presidency. He lost the 1980 election to his Republican opponent, Ronald Reagan.

Carter grew up on a peanut farm in Plains, Georgia. He graduated from the U.S. Naval Academy in 1946, and he served as a naval officer for seven years before returning to Georgia to work on the family farm. He entered state politics in 1962 and was elected Governor of the Peach State in 1970.

Since leaving office, Carter has worked to protect human rights and resolve conflict throughout the world. For his tireless work, he received the Nobel Peace Prize in 2002.

After serving as Ronald Reagan's Vice President for eight years, George H.W. Bush became the nation's 41st President in January of 1989. He rose to power during a time of profound international change. The Soviet Union collapsed, and the Berlin Wall fell. Still, he did not shy away from foreign affairs.

Bush sent troops to Panama to topple the regime of General Manuel Noriega, who was threatening the safety of Americans living there. Noriega was captured and transported back to the U.S., where he was later sentenced to 40 years in prison on drug-trafficking charges. Bush's greatest international challenge, however, would occur on a different continent.

In 1991, when Iraqi leader Saddam Hussein invaded Kuwait and threatened to enter Saudi Arabia, Bush took action. With the support of the United Nations and the American people, he ordered 425,000 American troops to the Middle East.

Despite the U.S. military triumph over Iraq's army, Bush's re-election bid was crippled by a weak economy, rising urban violence, and high deficit spending. His 1992 bid for a second term failed when Arkansas Governor Bill Clinton dealt him a knockout blow at the polls.

Prior to his life in politics, Bush had a distinguished career in the military. He enlisted in the armed forces on his 18th birthday, and at the time, became the Navy's youngest pilot to receive his wings. During World War II, he flew 58 combat missions. During one flight, he was shot down by the Japanese and rescued from the water by a U.S. submarine. He received the Distinguished Flying Cross for his courage in combat.

When he returned to America, Bush graduated from Yale University and followed his father, Prescott, into politics. In addition to representing Texas in Congress, Bush also served as Ambassador to the United Nations, Chairman of the Republican National Committee, and Director of the Central Intelligence Agency.

More than 35 years younger than outgoing President Ronald Reagan, Bill Clinton symbolized a new generation of American leadership. He arrived in Washington at the age of 46, having served two terms as Governor of Arkansas.

During his eight years in office, the U.S. enjoyed economic prosperity, including the lowest inflation rate in 30 years, the lowest unemployment rate in modern times, the highest home ownership rate in U.S. history, and the first balanced budget in decades.

In 1996, Clinton became the first Democrat since Franklin D. Roosevelt to win a second term. But his final years in office were marked by controversy after news broke of an inappropriate relationship with a White House intern. In 1998, he became the second U.S. President to be impeached by the House of Representatives. He was found not guilty by the Senate. Clinton was accused of perjury, or lying under oath.

As a young man growing up in Arkansas, Clinton was a delegate to Boys Nation. In high school, he traveled with the group to Washington, D.C., and met President John F. Kennedy in the White House Rose Garden. The experience inspired him to pursue a life of public service. He put his political career on hold, however, until he completed his education at Georgetown, Oxford, and Yale universities.

George W. Bush, a former two-term governor of Texas and a son of George H.W. Bush, the 41st President of the United States, came to office amid controversy over the narrow victory he achieved in Florida.  The Supreme Court  determined that a revote was unnecessary in spite of many irregularities, thereby awarding him the final state to assure him of an Electoral College victory over the Democrat, Al Gore of Tennessee.

After the traumatic attacks on New York's World Trade Center and the Pentagon (the Defense Department headquarters) in the suburbs of Washington, on September 11, 2001, by Islamic terrorist followers of Al Qaeda, Bush mobilized National Guard units across the United States in addition to the volunteer military to fight in Taliban controlled Afghanistan. At first the campaign to rid Afghanistan of the Taliban and Al Qaeda appeared to succeed. However, the leader of Al Qaeda, Osama Ben Laden remained uncaught and continued to taunt the U.S. with messages from his hideout in the mountains between Pakistan and Afghanistan.

Using the extraordinary powers of a war-time president, Bush brought captured Taliban and Al Qaeda suspects to Guantanamo Air Force Base in Cuba to be imprisoned and interrogated. Bush was heavily criticized for the methods used to interrogate prisoners at Guantanamo and in Afghanistan.

Bush won a second term in a close race against Senator John Kerry of Massachusetts. He was particularly criticized by opponents for his preemptive attack on the country of Iraq and its hated tyrant, Sadam Hussein. While many people were glad to be rid of a vicious dictator, it soon became apparent that American forces were badly equipped and led. With many casualties came scandals involving incompetent government use of private contractors and security officials. This was followed by more casualties, under supplied soldiers, too few troops, poor planning and many severely wounded Americans. Warring factions in Iraq attempted to assert control over the country and its huge oil deposits. Factions organized into Shia Muslims, Sunni Muslims, Al Qaeda terrorists, and pro-Iran militias.

Bush became increasingly unpopular at home with his inability to respond effectively to Hurricane Katrina when it flooded the city of New Orleans. Americans and the world looked on as people suffered from flood, neglect, incompetence, and bureaucratic errors.

By the time Bush left office, he was one of the most unpopular presidents in history. He had damaged American prestige in the world, he had attempted to overstep his powers and permit the torture of detainees, he had refused to send adequate numbers of troops to quell the violence in Iraq. In Afghanistan resistance to a coalition of Western forces became increasingly dangerous when they allied themselves with Pakistani terrorists.

In his youth at Yale and as an executive in sports, Bush had a reputation for difficult behavior. When he decided to end his use of alcohol, he settled into a political career in Texas, his adopted state.

Lesson plans, activities, and games to help students learn about past presidents and develop leadership skills.