When she was only 20 years old, her first record hit the top of the charts. And that was just the beginning for Eve Jihan Jeffers, now 25. She won a Grammy; she stars in a TV show; she has her own clothing line; and she acts in movies. Eve is rising to the top. But like every person who has a goal, Eve had some challenges along the way. Scholastic Action talked to Eve about being a female rapper, her family, and future plans. Read on to see what Eve had to say.

Action: Have you had any challenges in your life that would interest your fans?

was an obstacle and sometimes still is, is just being a woman in a male-dominated field. I have to work double or triple as hard as the guys do.

Action: To be taken seriously?
Eve: Yeah, just to be taken seriously. Just to have that respect. That's the biggest challenge, I think. Now it's a little different, of course, because I've kind of proven certain things. But because it's male-dominated, I always have to be on my game.

Action: Can you think of specific examples? When you first started rapping, were there times when people didn't take you seriously?
Eve: Well, through high school, I was pretty much the only girl who was rapping, especially in my school. So I would represent the girls, but I would always get flack from the guys, like, "What are you trying to rap for?" and whatever. We would have battles at lunchtime, and I would always be in the middle of a battle, but I would always have to fight my way through it. And then, once I got signed with my first album, I had an artist say to me, "You know, girls really don't sell over a million records, but good luck anyway." And my first album sold two million records.

Action: Were there particular times when you felt really discouraged? When you weren't able to make your album with Dre, did that have anything to do with your being a woman? Do you know what the reason was?
Eve: It wasn't meant to be. That's how I look at it. We just didn't mesh at that time. I was very discouraged. I had been in L.A. for eight months. I was away from my mother for the first time. I was about 19, trying to make it on my own, trying to be grown. Being sent back home to my mother, I was just like, "Oh, my God. This was my chance. What am I supposed to do now?" But my mother believed in me, and I believed in myself. It took me a little while—I got a little depressed and everything—but then I was like, "You know what? I'm determined to make it happen." So I picked myself right back up, and got a phone call, and had to go to another audition and prove myself again to be signed. I was determined to do it, and I did it. 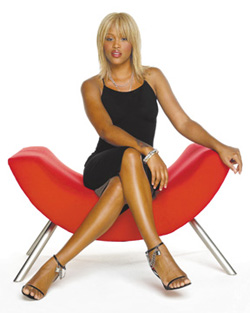 Action: Can you think of examples, or even just one example, of how your self-confidence and independence have helped you in your career? Or in your personal life? In fact, didn't you wind up producing a lot of your last album by yourself?
Eve: Yes, I actually executive-produced it. That was fun, because I got to make decisions. I love when I'm able to make real decisions. I love making business decisions; that was fun for me. That was also a scary situation, but I feel I have to do whatever—my feelings are very strong, and I never ignore them, ever. Just going somewhere or picking up and moving, or getting rid of something, or cutting somebody out of my life—well, that's a little harder. I've unfortunately had to cut some friends off along the way, which is hard, but you have to do it. I never really ignore my feelings. So for me, I guess that is being independent. Self-confidence, though, is weird for me. When people say, "You're so confident" . . . to me, I'm so self-conscious.

Action: Really?
Eve: Yeah, I am. I think it's just being a girl and being in this business. I mean, I'm pretty confident with the decisions that I make when it comes to clothes and hairstyles and things like that. You have to be confident, because it shows on your face if you're not. But I'm always asking my girlfriends, "Is this showing too much?" or "Is this too tight?" or "How does this look? Are you sure?" I'm always like that, because it has to be perfect. But I think sometimes being self-conscious helps you. It's a human thing. It's not something you should be ashamed of at all. I think every human being is self-conscious—everybody.

Action: You mentioned having to cut some friends off. Was that just in the course of your career?
Eve: Once my career started and this became my reality, my friends couldn't understand and handle it. It took a long time, and it hurt a lot. It took a lot of tears and arguments, but at the end of the day, that's life. The person who might be your best friend in the world right now—sometimes you just grow apart. That's just life. It's hard, but it's reality.

Action: Can you explain what you meant when you said your friends didn't understand?
Eve: Just as far as business. When I first got started, it was a lot of fun. There were a lot of parties. It was a lot of me not really paying attention to my business. My manager took care of a lot of things, and I just walked blindly and did whatever I was told. But then I started paying attention to taxes and budgets. I was flying my friends out with me, to come to my shows, and I realized I was spending all the money I was making. When I realized I had to stop bringing them, they were like, "Oh, you don't want us with you. That's not fair." It just really didn't work out.

Action: What do you want to do next?
Eve: Right now, I'm trying to get my foundation together. I have a foundation called the Love Is Blind Foundation that I'm trying to get off the ground. It'll be for battered women. But my main concern is, I want to be able to take urban kids and have classes for them with millionaires around the world, so that kids know that you don't have to be an entertainer or an athlete to become a millionaire. I want them to know that the world is so much bigger than where they live. I'd like to teach them about art, teach them about the value of money and things like that.