We've purchased fun painting tools from art suppliers before. Many are made of such basic components, I figured we could make some with stuff we already had on hand. One of the studio's volunteers at the Eric Carle Museum of Picture Book Art, Sarah, made and tested a batch of brushes with tempera paint. Here's what she did: 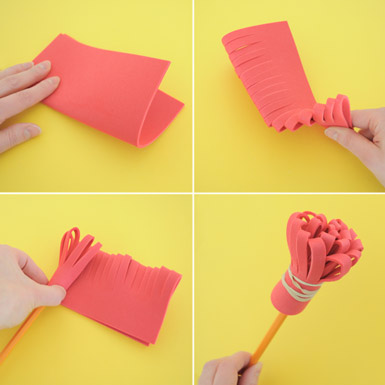 Starting with a 6" x 6" piece of flexible craft foam, she folded it in half and then made perpendicular cuts along the folded edge. Then she rolled the foam tightly around a pencil and used a rubber band to secure it. 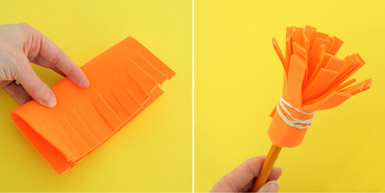 To make this brush she made cuts along the open edge of the folded foam and then rolled the pencil inside. It would be fun to try varying the space between the cuts to make wider or narrower fringe. A couple of our brushes  slid on the pencil if the foam wasn't rolled tightly enough. That was solved with a dab of hot glue down in the middle or re-rolling the foam. I suppose you could also put a bead of hot glue on the end of the pencil before rolling it in the foam to keep it in place. I think theses paintbrushes would make a fun stocking stuffer or package topper. I could also see a  "bouquet" of brushes (use green pencils!) in a vase making a great gift for a teacher. 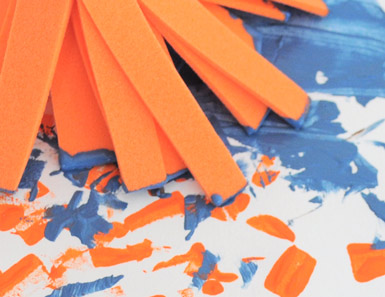